JAMMU, May 7: BJP has urged the Governor’s administration to review entire security setup by convening a meeting of police, civil administration and also Estate Department so that genuine people who are facing threat are provided with security cover and Government accommodation.
Expressing his shock over what he termed as barbaric killing of senior party leader Gul Mohammed Mir by terrorists in Srinagar, BJP State general secretary, Yudhvir Sethi at a press conference here, today said the Government should review entire security set up in the State and ensure security to those leaders who are genuinely in an ideological battle and fighting for the national cause.
Others present in the press conference included BJP All Cells incharge, Varinderjeet Singh, State press secretary, Dr. Pardeep Mahotra, State incharge IT & Social Media, Jaidev Rajwal and district president, Baldev Singh Billawaria.
Sethi said that right from Kishtwar to Kashmir, terrorists are trying to vitiate peaceful atmosphere and are targeting political leaders and there is no check on them. Taking the administration head on, the BJP leader said that withdrawal of security of many active mainstream political leaders has either resulted in killings or made them prone to threats all over the State.
He said that those mainstream politicians irrespective of their party affiliations who are touring far off places, staying among their workers, travelling extensively are soft targets of terrorists and should be given security.
In addition those who are in illegal occupation of Government accommodations exposing several other deserving people to security risk be vacated from these official bungalows, he added.
Sethi said killing of Parihar brothers, Chanderkant Sharma, Gul Mohammad Mir and other BJP and BJYM leaders in Valley beside other leaders in Jammu and Kashmir call for a security review where those prone to such attacks should be protected. He added that the political workers working extensively in far off and most interior places are becoming soft targets of militants.
Sethi said the way security has been withdrawn in recent past speaks of immature decision of security agencies and poor assessment of those incharge of security setup.
Demanding arrest of culprits behind all these political killings in the State, he said that officers who recommended withdrawal of security of these people, should be taken to task. Further the security from those who are misusing State apparatus for their personal gains and status symbol be also withdrawn, he added.

Residents suffering due to exorbitant rates of Ban toll plaza 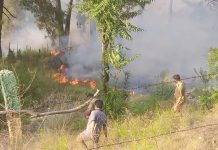 Fire breaks out in forest area

Cong flays Govt for use of biometric machines at ration depots