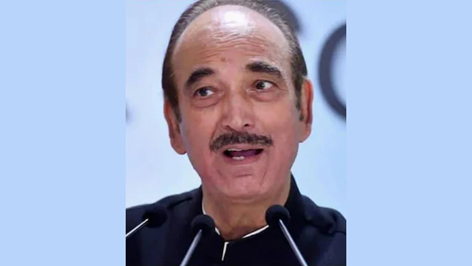 RAJOURI, Nov 30: Former Union Minister and senior All India Congress Committee leader, Ghulam Nabi Azad today said that development and not the religion should be the criteria to seek votes by the political parties.
While addressing party workers at Sunderbani on his way to Rajouri and Poonch districts this evening, Azad said, ” Report card should be the criteria for seeking votes from the people but it is unfortunate that some political parties were playing emotional and ‘religious card’, dividing the society to grab votes of the public. The people should remain cautious from the designs of such people,” Azad said.
Refer-ring to the massive development deficit in J&K after abrogation of Article 370, Azad said major ‘destruction’ was witnessed in Jammu and Kashmir after August 5, 2019. He said the status of J&K was reduced to UTs and major development projects were stalled or abandoned. He said many Medical Colleges or Hospital projects besides roads and bridges etc were abandoned or delayed.
Azad specifically referred to the Sunderbani Hospital project, which was initiated during Congress period and still remained incomplete. He said many such projects launched during Congress tenure in J&K were either shelved or delayed. He said the people are suffering badly due to lack of development but those ruling were raising hollow slogans. There was least contact between the Government functionaries and the general public.
The AICC leader said that youth of J&K were facing severe unemployment issue while daily rated and casual workers who have been working for the last 20-25 years are still struggling for justice. He said the workers are on the roads and youth frustrated but this Government has failed to address their legitimate issues.
Azad asked the party workers to extend their activities in their respective areas and project the issues of the people at the grass roots level and take up with the local administration. He dropped hint at the coming elections in J&K and cautioned workers to intensify their activities.
During visit, a delegation of PHE and other departments’ daily wagers also met the former Chief Minister and sought his intervention into the matter. Azad, however, assured them to take up their issue with Lt Governor, Manoj Sinha.
Azad who, arrived Sunderbani town at around 6.45 pm had brief address and meeting with the party functionaries including ex-MLC Ravinder Sharma, some Sarpanches and other workers. He listened to their issues and grievances and then left for Rajouri. He will address public meetings at Surankote, Poonch and Rajouri during his two days’ visit, a party spokesman said.