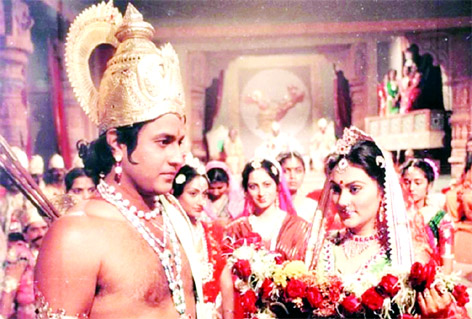 Geetika Kohli Amla
Flapping, the window pushed a spoonful of air towards me. The tear lining my eye, felt cold. As it trickled down my cheek, I held my breath and closed my eyes. The callous tidings of a forced exile had shaken the little child that I had been.
Our room reverberated with the melancholy number that ran on the television screen, and I looked into the box, at the silent, contained prince – Lord Rama, maryadapurushottam, the epitome of virtue. Though he was being expelled from the kingdom, his demeanour reflected nothing of it. He did not appear to be a victim – he was all prayer and no protest. From being a prince to a pauper and all he exuded was gratitude and self-control! What was his power? Baffled, I turned to my father. We spent hours on the shore of the epic Ramayana – watching the events unfold, him explaining to me philosophies that would be my anchor for life.
In India, generations have been raised on this powerful story of an exile. All of us have journeyed along with the reincarnated Vishnu and tasted the glories of the Treta Yug. We have relived his banishment and understood sacrifice as the road to enlightenment. Lord Rama continues to water our conscience and lend us his compass. Whether we know it or not, we find refuge in the strength of our character, one that has been nurtured by the epic. Our relationships reflect the knowledge we possess, and in the roles we undertake, we embody the principles of Lord Rama and Sita. Ramayana is our inspiration at work and the seed to the art we create. Though far from being perfect, I believe, we do possess the transparency and the tenderness that lets us be touched by this story, rendering us moist-eyed.
Recently, when the shutdown forced us to stay indoors and the decision to re-telecast Ramayana series (1987) was announced, many of us were driven to reflect on the story and contemplate its teachings anew. As the curtains parted and Rama emerged, young and decorated once again, we marvelled at his immaculateness. Each virtue of his, each word from his lips soothed us. We clung to the curve of his smile and sailed into the spiritual. And it being an indelible memory for the pre-millennial, we drowned in nostalgia and let the innocence of our past crawl onto us; most of us had been children when the programme was first aired. We reminisced, drew sketches of what had been and how. Many of us felt we were being carried, boated into our minds.Was not it as if someone had opened a backdoor for us to escape when the front one had been bolted? And flee, we did.
I ask, was the experience only about memories, nostalgia and the past? Was it only about strengthening our convictions? Were we to merely review the repetition of a story? Were we to simply recall our definite knowledge of what we assumed to be infinite? What was this pleasure in singing hymns we remembered? What was this enchantment? Did we turn this opportunity to meditate into yet another escape?
Reminiscence is an indulgence. It does not empower one. Nostalgia is amnesia, a paralysis, a state far from spirituality. Though we feel it, to say that Ramayana had only been relevant in its conjuring our precious memories, is unfortunate. There is great irony in watching the epic to confirm what we remember and to preserve it as it is. What is worse is that the story is also being retold by those who never found the moral in it by themselves.
The re-telecast, I believe, is an opportunity to rethink and relearn. None of us can claim to know the epic completely. Given the changed reality of today, every chapter in the story, every episode in the series will have to be examined from a new angle. We will have to acknowledge that in adhering to our perspective we have failed at taking the complete picture in. Have we not let biases warp our view? Did we ever really know Rama or understand his motives? How did we land at a black-and-white concept of life – deifying one, demonising another? Also, what about the idea of exile – what have we ‘distanced’ ourselves from? We look at Rama, but do we meet him?
The epic of Ramayana is a depth we are all yet to fathom. We need to watch it closely so that the broader motives of every character in it are revealed to us. We must question what we do not understand rather than revelling in our collective acceptance of the story. We must seek the ideals and strive to live them while we practice the karma of waiting. Knowing the answers or learning them is not the same as them coming to us through discipline and meditation. The pre-millennial generation who are now raising children or planning them and need to pass on this wealth of our scriptures must know that they will not succeed until they grasp the values themselves.
Today, as nature is reclaiming itself, it is beckoning our souls, asking them to return from their exile. Let us truly return to the Rama within. While we watch Ramayana, let it not be about staying congruent to what we can recall. Let us give up the debate on its existence and dwell upon the essence of the story. Let us not reduce the philosophy to rigid gender roles, race / religion supremacy or India as routes and borders. It is time we submit ourselves to the force that sustains everything.Can we finally acknowledge that Rama does not require us to empower him? It is him who we need to follow. Let us prepare for his homecoming, illuminating our minds with courage, surrender and faith.
(The author is an entrepreneur, writer and activist)