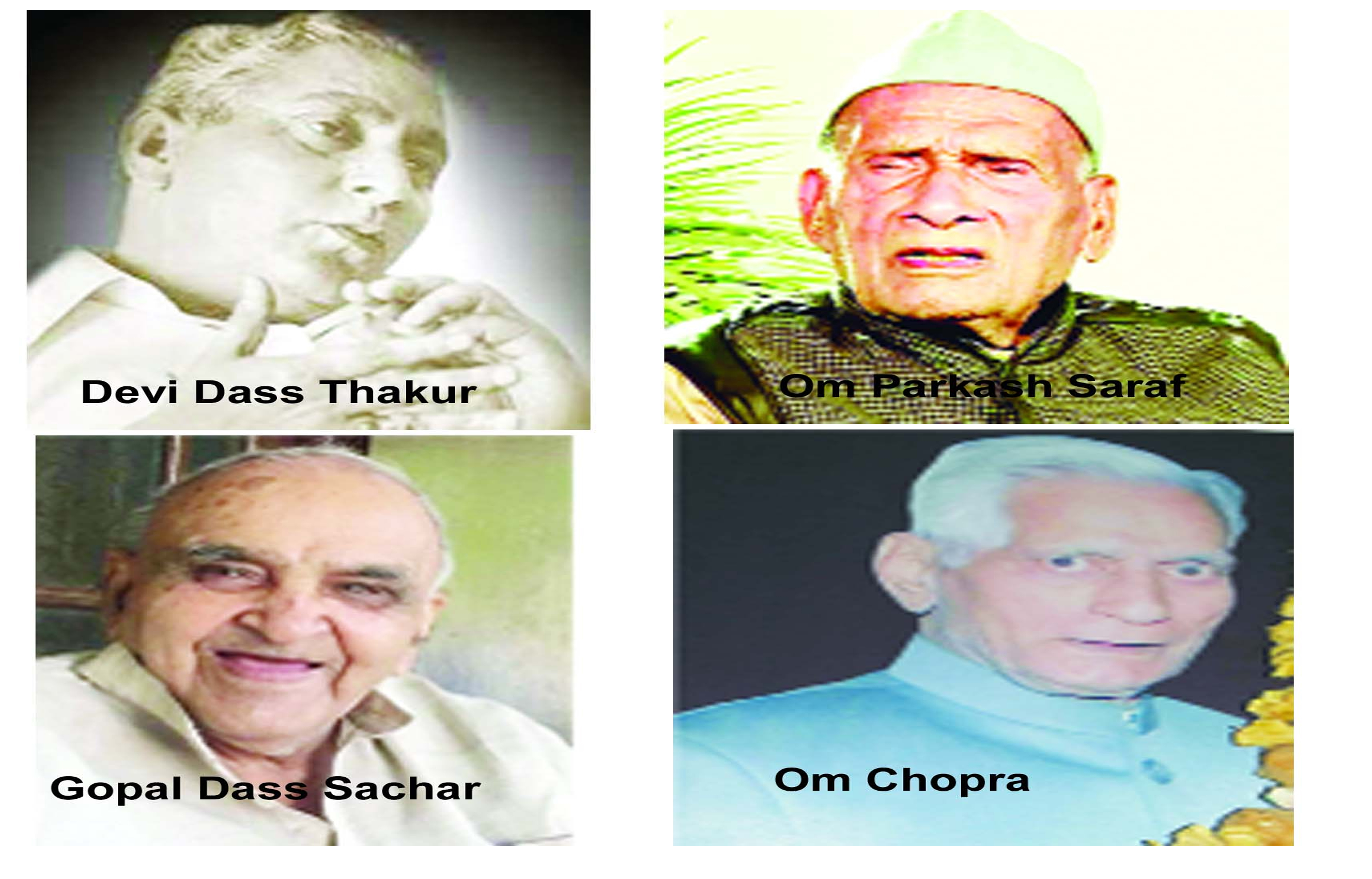 Pushp Saraf
A coincidence has stirred my childhood memories. All of us in the family were busy planning support for causes dear to my father Om Prakash Saraf, veteran journalist and public figure, to commemorate his approaching fifth death anniversary on November 25. The news came in of the death of veteran Hindi journalist Gopal Dass Sachar.
It jolted us. Five years separated them in life as they did in death. Father was born in 1922 and Mr Sachar in 1927. Our families had been neighbours for long in the Sabzi Mandi mohalla in the heart of the old city. I had moved out of Jammu as a teenager but have nostalgic reminiscences of my illustrious neighbourhood as a child.
The most remarkable aspect of my locality was that although noisy and crowded with vegetable vendors competing with each other it was a cradle of harmony. This was made possible by its formidable inhabitants who never allowed their ideological perceptions to mar their personal relations. Among them were Devi Dass Thakur and Om Chopra who left behind their mortal remains on February 3, 2007 and February 28, 2015, respectively. All of them fiercely stood by what they believed. Their differences never showed in their personal relations and certainly did not percolate to families which became rather close. This is unimaginable in today’s political environment in which a difference in opinion is seen as a sign of personal enmity.
Father after his expulsion from the National Conference had set up the state unit of the Praja Socialist Party (PSP) on November 9, 1954. The PSP was the first national party to have a unit of its own in J&K. Mr Sachar belonged to the Praja Parishad, the foremost avatar of the Bharatiya Janata Party in J&K. Mr Thakur who had come from a remote village in the Ramban hills had joined the PSP. He made his mark in the city by sheer hard work. Mr Chopra was a staunch Congress loyalist and one of the rare natives of the erstwhile princely state of Jammu and Kashmir to have been arrested during the “Quit India” movement of 1942.
In such an environment I had an early exposure of everybody who was anybody in J&K. It was usually in the morning that Mr Sachar would come to our home to meet father. Their discussion centred on news. At times Mr Sachar would be accompanied by the late BJP stalwart Krishan Lal Sharma, who was in charge of party affairs in the region. Last time I spoke to him was on telephone from Delhi to convey my condolences when Arun passed away. Arun, his son, was younger to me and his death came as a shock.
Some of the exchanges between Mr Thakur and father are still etched on my mind. They had stood up against the unscrupulous ruling apparatus which believed in “gun or gold” policy. On one occasion they were quite agitated as the information came in that Mr Thakur in his Ramban assembly constituency and their party colleague Acharya Nand Kumar in Nowshera had come close to victory but their supporters were outwitted by rivals with the help of official machinery in counting halls. It is not for nothing that the era of 1950s and 1960s in particular is often associated with subversion of democratic exercises. I distinctly remember that one morning Mr Thakur asked father what he would have done had the police not moved away from his public meeting in the Amirakadal assembly constituency (Srinagar) in the 1962 polls. Father simply replied: “They would have seen”. It turned out that the police had surrounded his public meeting in Lal Chowk to intimidate the audience only to withdraw after father told them to move away or face repercussions.
Mr Thakur would burn midnight oil. Whenever studying till late in night I would invariably see the lights of his office room on in the opposite flat. He became a distinguished lawyer, High Court judge, Deputy Chief Minister (of J&K) and Governor of Assam, and has left behind a highly talented family of jurists, lawyers and academicians. His eldest son Justice Tirath Singh has been Chief Justice of India and is among top legal luminaries of the country.
Mr Chopra created history by wresting the Jammu East seat for the Congress in 1983, a feat his son-in-law Yogesh Sawhney repeated in 2002. Mr Chopra was always high on energy. In a way he was the only full-time politician in the mohalla. While Mr Thakur pursued legal profession father and Mr Sachar remained active journalists till the end. Together they showed the way to co-exist. Childhood is often described as the most beautiful part of a person’s life. I treasure and recount this as a tribute to my father who had left us on November 25, 2017.