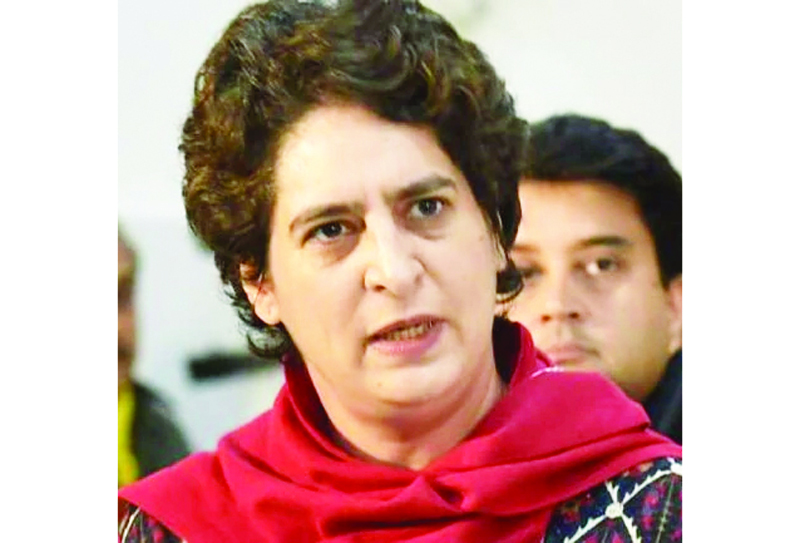 LUCKNOW, Dec 5:
Congress leader Priyanka Gandhi Vadra hit out at the BJP government in Uttar Pradesh over the law-and-order situation in the state on Thursday after a rape survivor was allegedly set on fire in Unnao by five men.
“Yesterday the home minister of the country and the Uttar Pradesh chief minister clearly lied that law and order in Uttar Pradesh has become better. Seeing such incidents everyday angers the mind. BJP leaders should now come out of false propaganda,” she said in a tweet.
The Congress general secretary also tagged a news report of the incident, wherein the rape survivor from Unnao was allegedly set ablaze early on Thursday morning by five men.
In another tweet, she said, “Hurt by the news of health of the Unnao victim. Pray to God that the victim gains health soon.”
“The BJP government’s statement of yesterday was that all is well in UP. Today another statement has come. But it is the responsibility of the CM and UP government to issue false statements and false propaganda,” she added.
In a tweet in reply to Priyanka, the UP Police gave details of the case. “In this matter, the victim had lodged an FIR alleging that she was raped between Jan 19, 2018, and Dec 12, 2018, by convincing her of marriage. The accused was arrested and sent to jail. He came out on bail on Nov 25. After the incident the girl was sent to hospital by the police. The probe is going on and scientific and circumstantial evidences have been collected,” police said.
Meanwhile, Samajwadi Party and Congress leaders went to the hospital where the victim has been brought with severe burns but were not allowed to meet her.
Senior SP leader and the Leader of Opposition in the Legislative Council, Ahmed Hasan, said his party wanted to extend help to the victim’s family but they were not allowed to meet them.
“We want to meet the family and extend them help but are not being allowed to meet them,” Hasan said.
UPCC chief Ajay Kumar Lallu also trained his guns on the state government and Chief Minister Yogi Adityanath over the sorry state of affairs, saying a jungle raj was prevailing in the state.
“It is strange that even after such heinous cases, the BJP government is patting its back. The accused, who were in jail, come out and commit another crime. No one is safe in the state,” he said, adding that the Congress was standing firmly with the victims of such incidents and would fight for them from the House to the streets. (PTI)