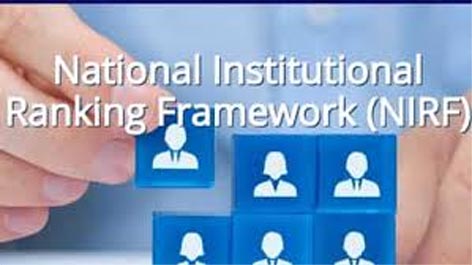 It is a matter of great delight that on the national canvas in terms of the standard of education and top educational institutions , the Union Territory of Jammu and Kashmir has made its impact felt by bettering ranking than the immediate previous records. Both the Universities in Jammu and Kashmir respectively have been ranked among top 100 institutions of the country . Not only that , Engineering College of Shri Mata Vaishno Devi University has secured 78th position among all the Engineering Institutes across the country which only registers the levels of standard of education especially in the higher and professional institutions of good reckoning. The same has been revealed by the statistics and the requisite information released by the Union Ministry of Human Resources Development under the set criteria for the same for the year 2020 under National Institutional Ranking Framework (NIRF) . We would only say that sky being the limit, while it is a moment to feel proud of, every nerve should be strained to aspire for still higher ranking which only demanded more efforts , better quality of teaching and appraising scholarship, research and development , adding more disciplines in teaching and trainings in our higher educational institutions and the like.
Since appraising is done purely on the basis of awarding points in respect of various parameters, University of Kashmir has been ranked at 78thslot scoring 44.67 points, at the same time University of Jammu has secured 90th position scoring 43.61 in the said category. It is, however, to be noted that among the category of universities , the ranking appears in the brighter mode as Kashmir University has secured 48th position scoring 46.99 points while Jammu University is at 52nd number scoring 46.55 points or in other words are nearly at the same platform . We have also to go in for comparative analysis which reveals yet another encouraging finding, that of both the universities of Kashmir and Jammu as also the SMVDU Engineering Institute having significantly improved their performance or tally as compared to last year’s NIRF ranking.
Various factors can be cited for better performance of our higher educational institutions including professional colleges. Generally, they excel in the quality of teaching and the students taking it all in them by responding very eagerly and enthusiastically by means of better student teacher relationship. Secondly, there has been very less or minimal, if not total absence of political ambitions, absence of unhealthy students’ unionism and absolutely no room for any activities other than related to education, learning, debates, symposiums and the like. Thirdly, excepting temporary closure of these institutions on account of the pandemic of Novel corona-virus this year which could not be avoided under any circumstances, these institutions usually remain functional and brimming with educational and learning activities throughout the year and last but not the least, the general prevailing culture in Jammu and Kashmir of laying more emphasis on reading , teaching and learning , these institutions have been showing better ranking.
In an era of competitions, information technology and aspiring for learning and knowing more , participating by these institutions in the competition as to who stood at more forward ranking itself was an embodiment of excelling in various areas and fields and better overall performance which alone generates such a spirit which sets the benchmark of not plummeting in any case but only bettering the ranking with the advent of each year and every opportunity. Perhaps, that speaks for Jammu and Kashmir having produced persons of excellence from these institutions which tradition hopefully shall remain alive with added vigour to emerge more relevant at the national scene.