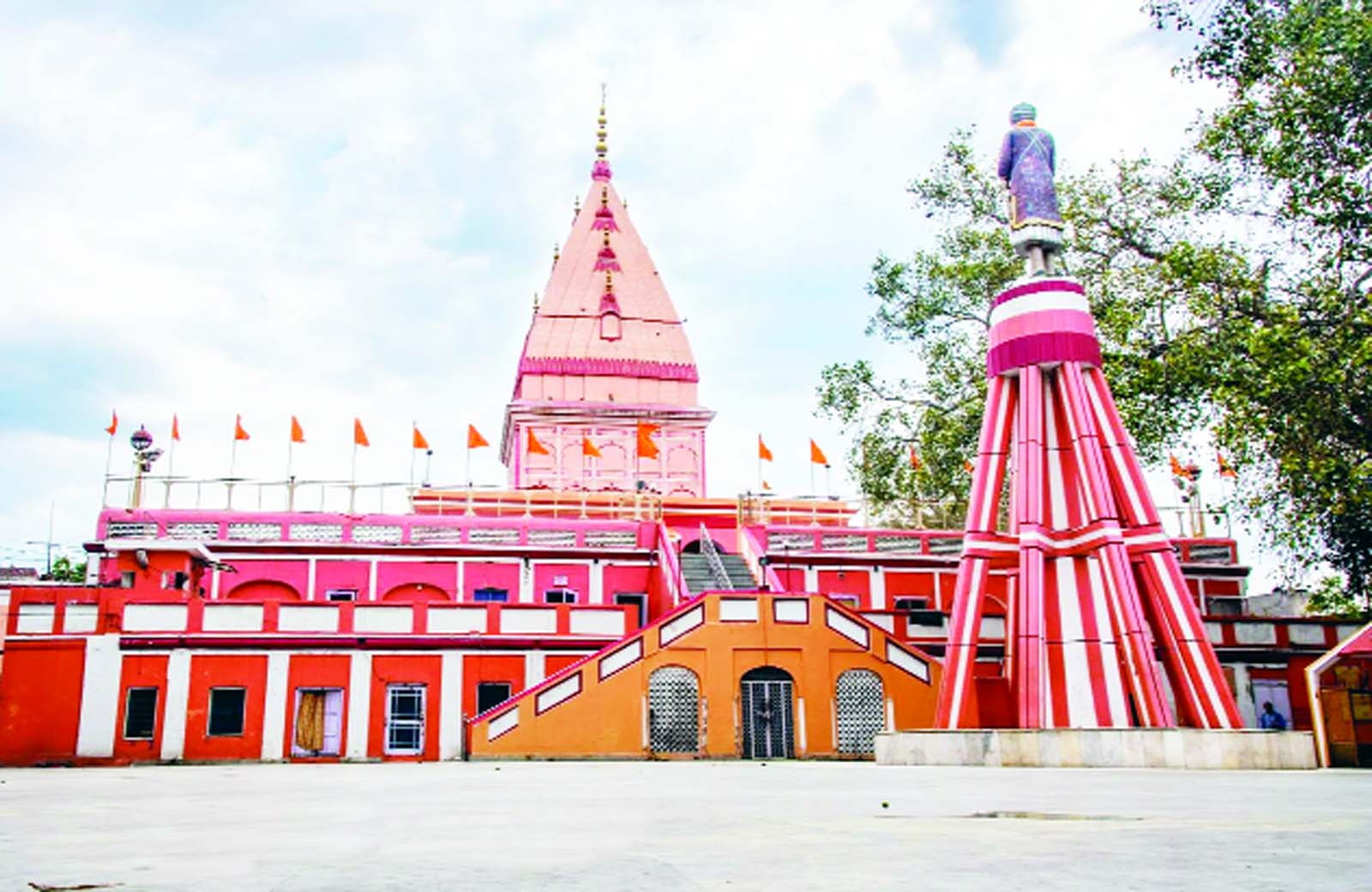 Shiv Chander Sharma
IN the city centre and just opposite to Civil Secretraiat there is a triple storeyed huge temple which is visited by a large number of devotees daily while thousands of people see it daily while passing through the main Shalamar Road in Jammu city. The ground floor and first floor have the rooms while the temple stands on the top floor.
This temple built in about 1880 AD by Maharaja Ranbir Singh (1857 AD-1885 AD)son of founder of then Jammu and Kashmir State with Ladakh, (Gilgit Eskardu etc presently held illegally by Pakistan at present), Maharaja Gulab Singh was just a part of his attempt to convert Jammu city into the city of temples on the pattern of Kashi (Banaras). He succeeded in his attempt and that is why Jammu is also called as City of temples even in present times. He also built many other temples and shrines in and outside the Jammu city which reflects the religious approach of Ranbir Singh.
The unique feature in this temple is the fact that the main temple of Lord Shiva is situated on the second floor and a statue of Ranbir Singh with folded hands is seen praying Lord Shiva in front of the temple. The name of this temple was given specially on the name of Maharaja Ranbir Singh meaning Lord of Ranbir, Ranbir plus Ishwar-Ranbireshwar. However, the statue was installed much later, few decades ago, and not by Ranbir Singh himself.
Besides the life size idols of Lord Shiva, his consort Parvati and son Ganesha a huge single stone Shivlingam inside the main temple attracts the devotees. A huge life size metallic Nandi (Ox) made of brass sititting at the entrance of the main temple which faces the main idols.
A regular visitor to the temple Girdhari Lal says that the rare Ekadash Lingams made of Safatik, (a special transparent white stone) is rarely seen in the Shiva temples which were specially brought by Maharaja Ranbir Singh from Varanasi (Kashi). Not only this, Shaligrams in two adjoining halls of the temple were also specially brought from the bed of Narmada river. Shaligrams have special significance for Lord Shiva worshippers.
In addition to all this there are small temples having idols of Mahakali, Lord Panchmukhi Hanumaan, Shani Devta, Ganesha and Kartik, the elder son of Lord Shiva just outside the main temple. On one side of Nandi, is a huge metallic bell which weighs over a qunital (Over 100 kg).
The place where this temple has been built was a small hill and a saint used to perform meditation at this place whose Samadhi has been built below the temple in the large open land on which stands a Shivlingam of Sindhoor on a raised platform. He is believed to had guided the Maharaja where the temple should be built on a height, another regular visitor Mandeep said. The Shivlingam was placed at the height which was the top of that hillock on the advise of that saint. The temple has a large space for the worshippers who can sit and do meditation inside the temple which is rare in most of the temples.
A Mela is held in this famous temple on every Mahashivratri in which thousands of devotees throng to pay their obeisance to Lord Shiva. A day before this pious day, a tableau of Lord Shiva depicting various phases of Lord Shiva is taken in the city from this temple. In addition, during the two months Amarnath Yatra large number of Sadhus and pilgrims are provided meals and served tea and snacks every day during the Yatra period, said Rajinder Sharma and Shikha Singh living in the rooms meant for the employees of the Dharmarth Trust.
Interestingly, a beautiful park within the premises of this most revered temple attracts large number of local people and devotees for daily morning and evening walk. Several species of flowers, trees including a Rudraksh tree, Bilva trees also attract pilgrims coming from outside the Jammu and Kashmir Union Territory as well as locals. A fountain with the idol of Lord Shiva is an added attraction for the pilgrims and local devotees which glows in the evening hours with colourful lights, said Banarsi Dass Sharma, an employee of the Dharmarth Trust which looks after most of the ancient temples built during the Dogra royal period.
Yoga classes are held in the morning sessions inside this park, named as Yasho-Karan Park, Joint name of main Trustee and First Governor of Jammu and Kashmir State and son of last Dogra ruler Maharaja Hari Singh, Dr Karan Singh and his wife late Maharani YashoRaje Lakshmi. This park was inaugurated by former Governor of Delhi Late Sheila Dixit. Large number of people can be seen in the park, which opens at 5’o Clock in the morning and closes at 8 PM every day. Beautiful Park lights have been installed in all sides of this park which also has a tiled path besides lush green grass within the path premises.