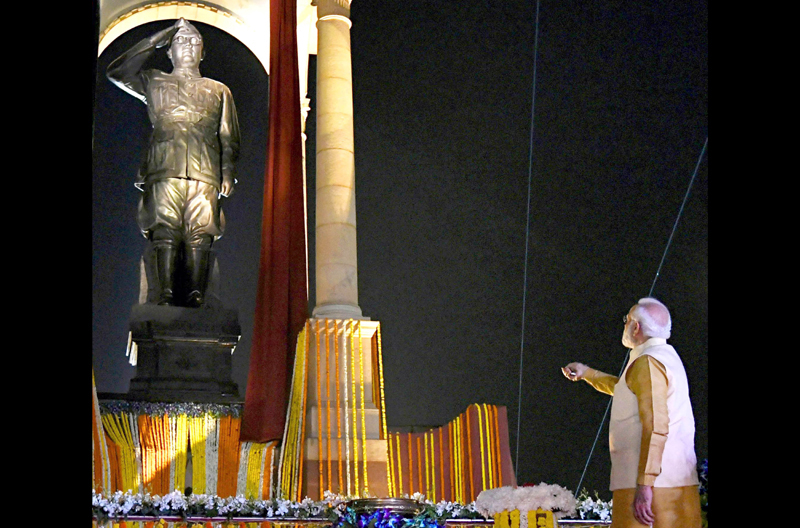 Prime Minister Narendra Modi today said Rajpath symbolised India’s “slavery” and has now been consigned to history as he inaugurated the revamped stretch with a new name, Kartavya Path, and unveiled a statue of Netaji Subhas Chandra Bose at India Gate.
In a swipe at previous Congress Governments, he said had India followed the path shown by Bose, then it would have reached new heights but the iconic leader was sadly forgotten and his symbols and ideas ignored. He added that imprints of his ideals and dreams are now visible in the BJP Government’s works.

Kingsway or Rajpath, a symbol of slavery, has been consigned to history and erased forever, Modi said, asserting that a new history has taken birth in Kartavya Path and this along with Netaji’s statue will now guide and inspire the country.
“People will see the India of the future in them and its energy will instill them with a new vision for a great India,” he said.
He also said that the changes undertaken by his Government are not just limited to symbols but are now part of policies.
This is neither the beginning nor the end, Modi said of efforts towards removal of symbols of “slavery”, adding that it is a relentless march of resolve with the goal of the freedom of one’s mind. “Both thinking and behaviour of the countrymen are getting freed from the mentality of slavery.”
Noting that Rajpath was also known as Kingsway earlier, he said it was appropriate for the British Raj when India was under its rule. Its spirit as well as architecture symbolised our slavery and now both have been changed, he said following the inauguration of the renovated central vista avenue.
“Kartavya Path will now remind all that we need to keep the nation first. When people of the country come here, the statue of Netaji, the National War Memorial will inspire them so much and fill them with their sense of duties,” he said.
The revamped stretch from Rashtrapati Bhavan to India Gate is estimated to have cost around Rs 477 crore.
This is an example of developing our cultural infrastructure, Modi said and cited the Statue of Unity dedicated to Sardar Patel and National War Memorial as other such examples.
The inauguration of Kartavya Path and installation of Bose’s 28-ft-tall statue at the canopy where a statue of King George V stood till 1968 were not the first example of the country getting rid of its colonial mindset, he said, adding that his Government has taken steps like renaming Race Course Road as Lok Kalyan Marg, where the Prime Minister’s residence is located, and repealing outdated laws.
The date and timing of Union budget presentation has been changed and a new education policy brought in, he said, adding this spirit is guiding his Government’s policies.
“India has now set its own ideals, pledges and goals. Today, our paths and symbols are ours own,” the Prime Minister said.
In this Amrit Mahotsav, the country has now got new inspiration and new energy, he said.
The revamped stretch is part of the Modi Government’s ambitious Central Vista redevelopment project.

Modi also thanked workers involved in the development of Kartavya Path and said that they not only built it but also showed the others way of ‘kartavya’ (duty). They will be his guests for the Republic Day parade on January 26, he said.
Workers involved in constructing the new Parliament building will have a special gallery dedicated to them, Modi said.
As India celebrates ‘Azadi Ka Amrit Mahotsav’, it is our resolve to have a feeling of pride in our traditional heritage and put the country on the path to unstoppable development, he said. (PTI)