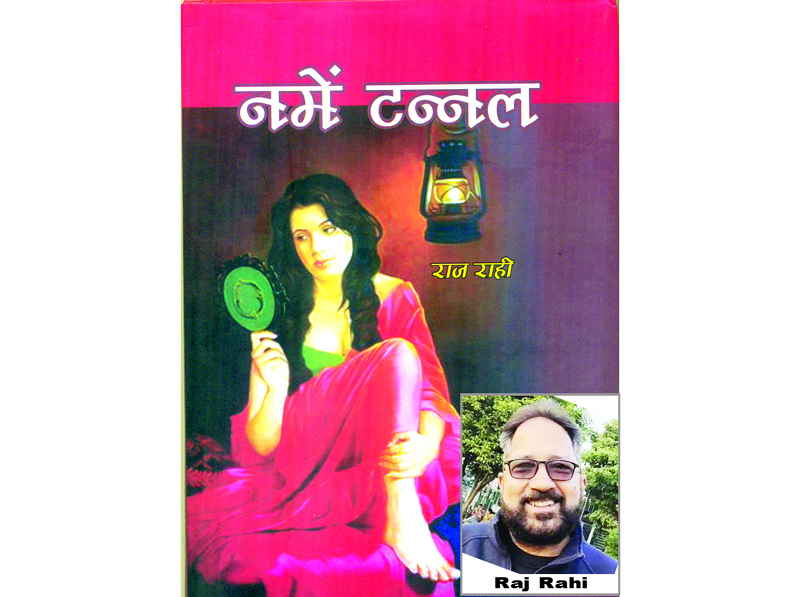 O P Sharma
For the year 2021, Raj Rahi (real name Raj Kumar Sharma) bagged the prestigious Sahitya Akademi Award for his Dogri book entitled ‘Namme Tunnel’ (A collection of 17 short stories).
Raj Rahi is 49th Dogri writer to get this coveted award constituted by the Sahity Akademi, New Delhi which has been honouring one Dogri writer or the poet alongwith other regional Indian languages every year since 1970. The award carries cash prize , a certificate, scroll for literary contribution to the Dogri literature every year and is bestowed on the writers at ceremonial function at New Delhi.
Raj Rahi, was born in February, 7, 1959 to late Dhani Ram Sharma and Soma Devi at village Karanee in Reasi town in Jammu and Kashmir. He had early schooling in the birth place. Later, a privately pasts BA (Honours) in Dogri and also did post graduation in Dogri from the University of Jammu in the year 1989 and married Renu Sharma in the year 1987 and has two sons: Vivek and Shubam. He worked in the J&K Forest Department and attained superannuation as SO on February 28, 2019.
His hobby included reading books, travel and watching television to gain knowledge. From the beginning he had literary bent of mind and started writing in his mother-tongue, Dogri. Raj Rahi’s first short story book ‘Sindhe Sahib’ in Dogri was published in 2002 while another book titled ‘Asli Varis’ appeared in 2009 followed by ‘Bounsari di Toan’ in 2016 and ‘Namme Tunnel’, (short stories in Dogri during 2019), which won coveted Sahitya Akademi Award in the year 2021.
Literay Merit
The book ‘Namme Tunnel’ containing 17 short stories is a literary work of merit aned has been published by Shakuntla Prakashan, Reasi during the year 2019 and attracted much attention in the literary circles. It is a significant contribution to Dogri language and its literature. This 168-page book in Dogri was selected for the the coveted Sahitya Akademi Award for 2021.
The stories in the award winning book ‘Namme Tunnel’ have literay merit with interesting and instructive stories with real life characters. The stories are absorbing and based on our social setting with a forward looking view point.
Sweet Dogri
The language used by Raj Rahi is typically simple, stylish and literary. The author, it seems, has masterly used the easy-to-understand Dogri idioms and vocablary with unique themes in his narration which is at once captivating in natural flow. The Dogri language is now gradually gaining popularity with the promise of action-oriented suitable policy to promote it in a big way by imparting education in the mother-tongue as well to make Dogri internet-savvy.
Dogri has a number of noted short stories writers like Ved Rahi, Madan Mohan Sharma and some, who have enriched the Dogri language and its literature.
A rich depiction of social, economic and political conditions of India of the last four decades can be seen in the stories of Raj Rahi. His stories being published since the 1985s depict all colours and contours of a common man’s life. Since Raj Rahi is from J&K, his stories depicts the impact of universal problems like long-drawn India-Pakistan conflicts claiming lives of security persons and civilians as causing destruction of property. The constant conflict in the mind-set of the people and instigations from, across the borders, is presented in a very forceful way.
Real Life Depiction
Raj Rahi portrays the pain, anguish, apathy of the marginalized common man very beautifully in his stories. The characters of his stories appear like human beings before any reader, living and experiencing reality. The story presentation is so beautifully weaved that every reader feels his own sentiments reflected in the narration of Raj Rahi.
The very first story titled Manne Tunnel is woven around the so-called development works like construction of road, rails or other infrastructure at the cost of degradation of environment like ruthless cutting of trees and mindless destroying of precious Forest wealth is “actually critical”. There must be sanity, pleads Raj Rahi.
Renowned Dogri writer and recipient of Sahitya Akademi, Prakash Premi has written Foreword and appreciated the style and substance of this book by Raj Rahi while some other noted stalwarts like Ramnath Shastri, Shiv Nirmohi, Mohan Singh, Ved Rahi and Dr Om Goswami, Lalit Magotra Padma Sachdev too have expressed good word for the ” Namme Tunnel”
Interesting Book
In an interview on phone, in reply to a question. Raj Rahi told me details about his life and literary work in Dogri especially in the short story sphere. After announcement of the Sahitya Akademi Award to him about his name for Dogri, Raj Rahi said “I was overjoyed and termed it as honour to the Dogri language and the people associated with this sweet language”. Dogri is now set on forward journey with a promising bright future as one of the languages of India.
The common man have a good word for the honour bestowed by the Sahitya Akedemi to this Dogri writer. I have gone through the “Namme Tunnel” with interest and found it profitable.
(starline.syndicate.service@gmail.com)