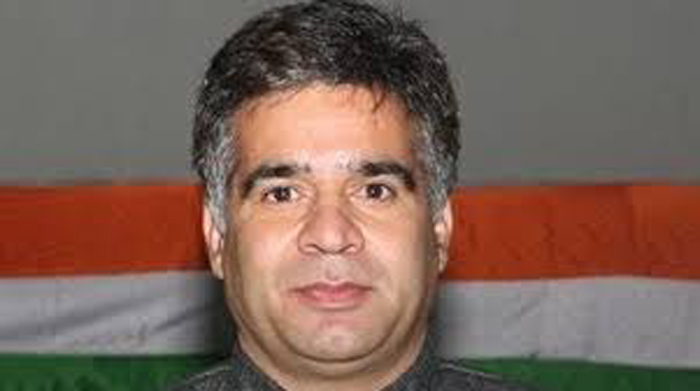 Avtar Bhat
JAMMU, Dec 11: BJP president for J&K and Ladakh UTs and former MLA, Ravinder Raina was likely to emerge as consensus candidate for the post of president for two UTs the election process of which will be completed by December 20.
According to party sources, Raina who was elected president of erstwhile J&K State BJP on May 13 last year is emerging as a consensus candidate to be elected for the next term as the incumbent has not completed his three year term as BJP State chief.
Raina had succeeded the then outgoing State president of the party, Sat Sharma after his induction, as Minister in PDP-BJP coalition.
Sources said that BJP high command in New Delhi as well as RSS leadership is also favouring another term for Raina and party is deputing two senior national leaders to the State including its national general secretary, Murlidhar Rao and national secretary Sunil Dev Dhar to Jammu on December 13 to hold parleys with senior BJP functionaries and RSS leaders here to evolve a consensus on the new party chief for J&K and Ladakh UTs.
The two national leaders will also take the opinion of the State election incharge Virenderjit Singh and co-incharge, Munish Sharma in this regard, sources added.
Sources said that Raina, an RSS ideologue will emerge as a consensus candidate in view of support he gets both from Sangh and BJP High Command.
To discuss the strategy of party elections for the president of J&K and Ladakh UTs, both Raina and BJP J&K general secretary (Org), Ashok Kaul were summoned by high command to Delhi two days back and they held detailed discussions with senior party leaders including national working president of the party, J P Nadda, party national general secretary (Org), B L Santosh, general secretary and Incharge J&K, Ram Madhav and party vice president and Prabhari J&K, Avinash Rai Khanna during their two days stay in the Union capital.
Raina without divulging details about the party’s stand on election of new president for two UTs, however, said that he and Kaul met the senior leaders in Delhi and discussed the prevailing situation. He said the developmental issues and prevailing law and order situation in Kashmir was also discussed with the senior leadership.
However, the party sources said that though there are four five contenders for the post of president for two UTs but high command has given indication of evolving a consensus on the name of Raina. The other party leaders who are trying their luck for the post of BJP president of J&K and Ladakh UTs included Party general secretary and another RSS ideologue, Dr Narinder Singh, former Minister and ex State president, Sat Sharma, former MLC, Vibodh Gupta, former general secretary, Satish Sharma, vice president, Pawan Khajuria and general secretary Yudhvir Sethi.
Sources said some of these leaders had visited Delhi and met senior party functionaries there too to garner support for their candidature.
The election process for the party was started in August this year with the election of booth and Mandal level presidents. The Party has given deadline of completing the process before December 31 this year with election of national president.
For the election of State president in J&K, the deadline was given up to December 15 but this has been extended up to December 20 as party wanted that election in all States of the country should be held on a single date, sources said.
They added that for conducting election of president of J&K and Ladakh UTs the party High Command has nominated two observers including Union Health Minister, Dr Harshvardhan and party national secretary, Tarun Chug to J&K on December 20.
The party election incharge J&K and Ladakh Virenderjit Singh said that out of 17 BJP districts in Jammu region, election process for 15 districts has been completed while the elections for two districts of Ramban and Kathua will be conducted later and the party will nominate the presidents for both the districts.
He said the elections for 10 districts in Kashmir valley and two districts of Ladakh UT will also be held later in view of inclement weather conditions there.