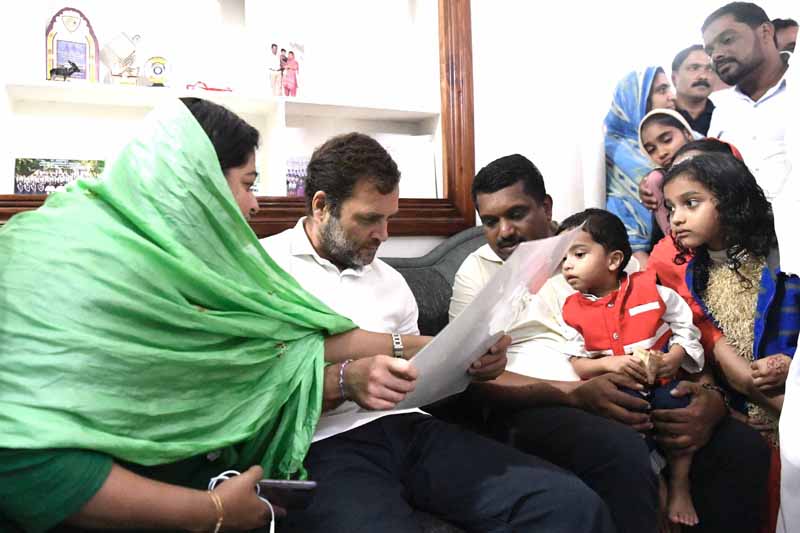 SULTHAN BATHERY (Ker), Dec 6: Congress leader Rahul Gandhi on Friday visited the government school here where a 10-year old girl died after being bitten by a snake in her classroom and praised the students for raising their voice demanding accountability.
Gandhi met the grieving parents of Shehala Sherin and also the school authorities and members of the Parents Teachers Association (PTA).
He also went to the classroom where the fifth standard student was bitten by a snake last month.
Later interacting with students, Gandhi asked them to stand with those who were being harmed and humiliated.
“In many ways you are India. There is no India without you. This brings a responsibility on you. You have to protect all religions all languages and all cultures,” he said.
“When someone is harmed and humiliated you must stand by them. It is an act of weakness to attack someone who is weak. But it’s an act of strength to protect them. I’m happy to see the students of this school demanded accountability,” Gandhi said praising the children for hitting the streets and raising their voice against the teachers who had allegedly refused to rush Shehala to hospital. Stressing the need for a medical college in Wayanad district, Gandhi said the girl would not have died if there was a medical college here and assured all help in getting access to the land which is under the control of Madhya Pradesh government.
“The tragedy is that there is no healthcare institution here that can take care of such incidents and there are no hospitals that can provide better treatment in such cases,” he added.
With steps already underway for construction of a medical college, the Congress MP said he had informed chief minister Pinarayi Vijayan that he could offer help for getting access to the land which was under the control of Madhya Pradesh government.
(About 500 acre of the Beenachi Estate at Wayanad is owned by the Provident Investment Company, a Government of Madhya Pradesh undertaking).
Refusing to enter into any blame games, Gandhi said he was not going to point fingers at anyone for the tragic incident.
“It is not my job to blame someone or to hold an enquiry. I’m sure that process will take place. It is my job to look forward”, he said. (PTI)
Meanwhile, the Kerala government on Friday declared Rs 10 lakh compensation to the family of Shehala. (PTI)