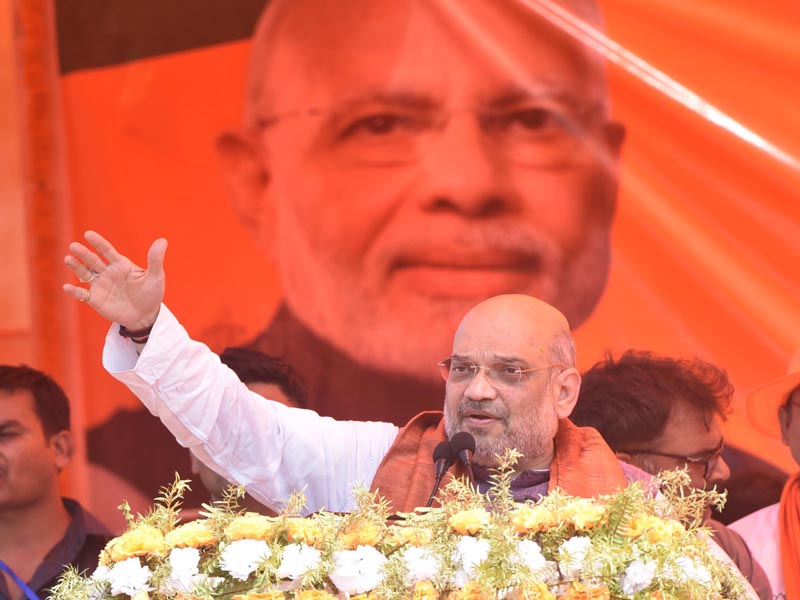 MUNGER (Bihar), Apr 24: BJP president Amit Shah on Wednesday launched a stinging attack on his Congress counterpart Rahul Gandhi whom he accused of having gone into mourning upon air strikes in Balalot along with those in the Pakistan ruling establishment even though nation-wide celebrations were held to hail the operation.
He said Gandhi may carry on doing “Ilu Ilu” (a famous Bollywood song of the 1990s that abbreviated the expression I love you) with Pakistan, but they under Prime Minister Narendra Modi having a 56-inch chest will give beffiting reply to any act of cross-border terror.
Only two types of people were mourning the Balakot air strikes. One was those in the ruling establishment in Pakistan. The second was Rahul baba and company,” Shah told an election rally here.
Since the 1990s, whenever the Congress was in power, we had to contend with the humiliation of Pakistan-sponsored terrorists killing our soldiers, mutilating their bodies. Karyakartas (BJP-RSS workers) like me cannot forget how helpless Mouni Baba (Manmohan Singh) used to look, the BJP president said.
In frustration, they are seeking proof of the air strikes. In the past, they sought to defend anti-national slogans inside the JNU premises in the name of freedom of expression. They even want to do away with the sedition law..
I want to tell Rahul baba, you may carry on with your efforts to get convicts like Lalu Prasad out on bail. But as long as Narendra Modi is in power anti-nationals will find themselves behind bars, Shah said.
Mocking at the opposition Mahagathbandhan for the lack of cohesiveness and absence of leadership, he said, I had got a very interesting SMS – if this formation gets a majority, Mamata Banerjee will be the Prime Minister on Monday, Akhilesh Yadav on Tuesday, Mayawati on Wednesday, Lalu Prasad on Thursday, Chandrababu Naidu on Friday Deve Gowda on Satruday and the entire country will go on a holiday on Sunday.
Tell me, is this how a country can be run, is this how Pakistan can be given a befitting a reply and terrorism can be quelled, Shah asked evoking a loud no from the crowds.
Speaking about the development works by the Modi government, he said in the last five years, cooking gas has been brought to seven crore families and toilets to eight crore households. The Ayushman Bharat scheme, which provides an annual insurance health cover of Rs five lakh, has already benefited more than 23 lakh poor.
Let the Congress give an account of the 55 years it has enjoyed power in the country,” he said. He made a scathing attack at the RJD, an alliance partner of the Congress in Bihar.
“Memories of the 15 years long Lalu-Rabri regime, known as jungle raj because of the lawlessness that characterized it, still brings shudders to the people of the state. A change has been brought about by the efforts of Chief Minister Nitish Kumar and Deputy CM Sushil Kumar Modi,the BJP president said.
Modi had promised an assistance of Rs 1.25 lakh crore.
Work has begun on schemes worth Rs 1.10 lakh crore. Rahul Gandhi came to the state and challenged Modi to tell what he did for Bihar in five years. Let him give an account of what five generations of his family did, Shah said evoking cheers from the crowd.
This is my 255th rally in four months of the year. I have travelled across the country. Wherever I have gone, I have heard the deafening chants of Modi! Modi! Modi!, Shah said at the election meeting where he was accompanied by a number of senior leaders including Sushil Kumar Modi.
Shah was here campaigning for the JD(U) candidate Rajiv Ranjan alias Lalan Singh, a state minister and close aide of Nitish Kumar. Shah began his 25-minute speech with an exhortation to the public to chant Bharat Mata Ki Jai saying it must be loud enough to be heard in the neighbouring state of Jharkhand where Prime Minister Narendra Modi is camping. (PTI)