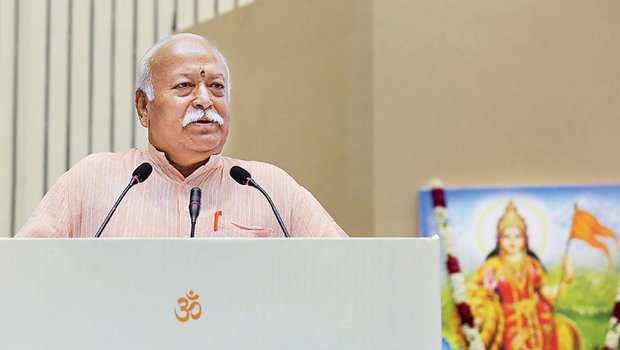 RANCHI: Problems such as radicalism and climate change are disturbing peace across the world and the solution is only with India as it has got the experience to think holistically and address these issues, RSS chief Mohan Bhagwat said on Thursday.
“And the world waits for India, so India has to become a great nation,” he said.
Addressing the ‘Metropolitan Meeting’ organised by the RSS here, Bhagwat said that whenever India took a pole position it benefited the world.
“Problems of radicalism, environment and the belief that one is right while the rest are wrong are the basic issues disturbing the peace in the world,” he said.
Only India has got the experience to think holistically to find solutions to these problems, Bhagwat added.
Calling upon RSS members to connect with people irrespective of their caste, language, religion or region, Bhagwat said that India’s characteristic is to fasten everyone with one thread on the principle of ‘Vasudhaiva Kutumbakam’ (the world is a family).
“We live for each other, not for ourselves,” he said.
“We believe that the world has made us and we have to give back to it and we look at the world with gratitude,” Bhagwat said.
Sharing an anecdote, Bhagwat said a Muslim intellectual from the country once went for Haj and was sent to jail on blasphemy charges for wearing a ‘locket’.
“The then foreign minister Sushma Swaraj intervened and got him released within eight days,” he said, alluding that anyone from India is considered a Hindu.
“Because Bharatiya sanskriti (Indian culture) is also known as Hindu sanskriti, reflecting its values, conduct and culture,” he said.
Bhagwat said Hindutva idealogue K B Hedgewar was involved in every movement including social reforms during the freedom struggle and formed the RSS so that social evils that brought over 1,500 years (‘of foreign rule’) can be rooted out and long-lasting values like selflessness, non- discrimination and equality are established. (AGENCIES)