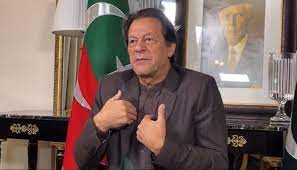 Islamabad, Dec 4: Pakistan’s former Prime Minister and Pakistan Tehreek-e-Insaaf (PTI) Chairman Imran Khan said that the assemblies of Punjab and Khyber Pakhtunkhwa provinces won’t be dissolved if the election will take place by March.
While giving an interview with a Pakistani private channel, Imran Khan said, “If they are ready for elections by the end of March, then we won’t dissolve the assemblies. Otherwise, we want to conduct polls by dissolving the KP and Punjab assemblies,” Geo news reported. PTI Chairman further said that his party won’t agree to a date after March and the assemblies will dissolve in this [December] month if the government disagrees.
“How long will they take to decide? They either have to say yes or no. We have already decided,” the former premier said underlining his conditional stance on talks with the government on the election date.
“If they [government] want, we can talk to them about what date the elections can be held. There is no way elections can take place after the budget,” Geo News quoted him as saying, adding that the government will take the country down this way.
“Do they want polls to take place in 66 per cent of the country and then conduct general elections?” Khan questioned, suggesting they announce the election date soon.
Earlier also, Khan announced that his party has decided not to remain part of the current political system and will instead resign from all the assemblies.
Imran’s PTI is in power in Punjab, Khyber Pakhtunkhwa, Pakistan-occupied Kashmir and Gilgit-Baltistan. However, the PTI has yet to announce a date for the dissolution of assemblies in Punjab and KP, according to Dawn.
Addressing the party’s power show in Rehmanabad, Khan said, “We will not be part of this system. We have decided to quit all the assemblies and get out of this corrupt system.”
In an interview with a Pakistani private news channel, Pakistan Peoples Party (PPP) co-chairman Asif Ali Zardari ruled out snap polls saying that it won’t “suit us or democracy” and claimed to have ‘enough numbers’ in both legislatures, the Dawn reported.
“It’s too immature and too soon to say anything about the elections. I don’t think there is a possibility of the establishment forcing early elections,” he said.
However, at the same time, he asserted that the coalition parties would contest the polls if the PTI succeeded in dissolving the provincial assemblies. “I will see how many MPAs Imran is able to get.”
In response to a question about the tabling of no-confidence motions, Zardari said: “God willing.” (ANI)