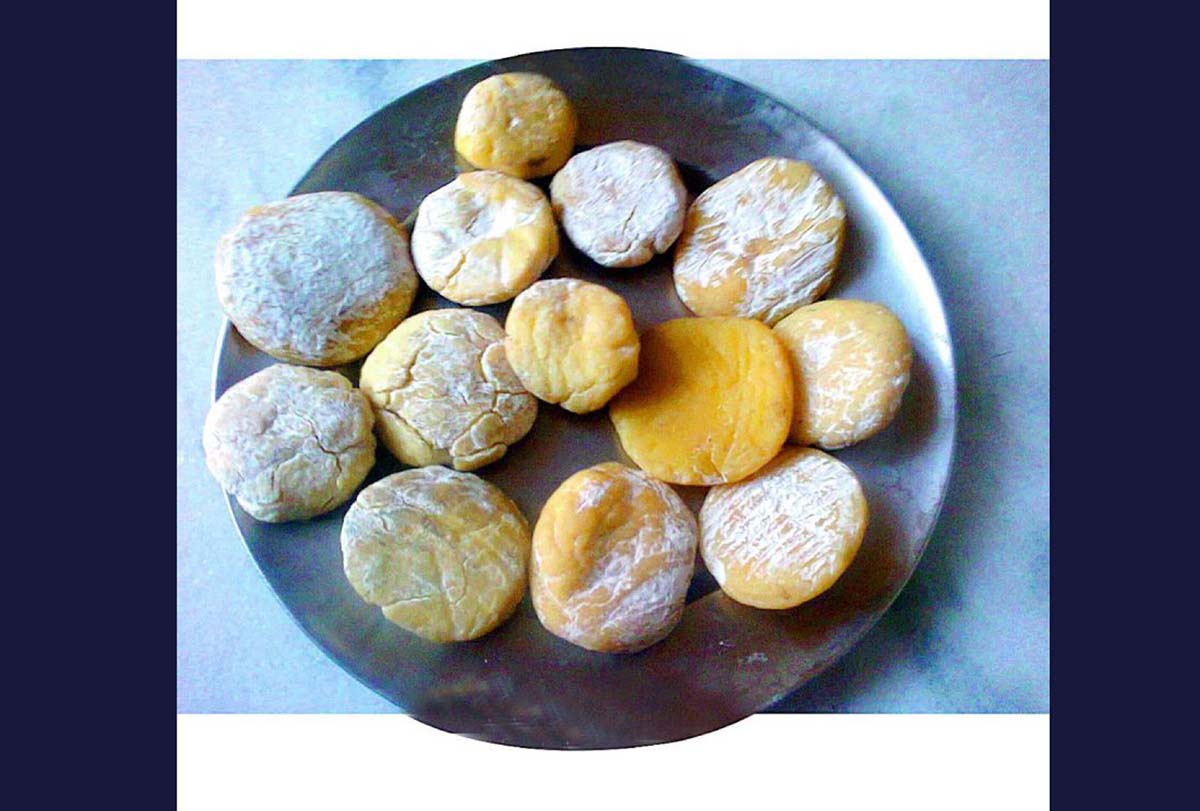 Dr. Sheetal Badyal
Union Territory of J&K is known for many exceptional things and Kalari is one of them. Jammu is said to be the home of the world’s most unique cheeses, called as the Kalari. Kalari was traditionally made from raw full fat milk, vigorously churned in an iron pot with a wooden plunger-like tool.
The molten mass of milk solids was then separated by adding sour milk or curd called mathar. Once stretched, the flattened cheese is cooled on the black iron pot itself, before being placed in a bowl to solidify. The solidified cheese is then sun dried to help it lose the rest of its moisture. Since the ambient temperature in the mountainous area of J&K remains low despite a strong sun, the Kalari dried from the outside yet remain moist inside. Widely consumed in Jammu and Kashmir as a street snack, flattened Kalaris are salted and sautéed in their own fat on a hot griddle. After sautéing, the cheese develops a crisp golden layer on its exterior but retains a soft, creamy, gooey molten from interior. Flavoured with spices and served hot, Kalari is topped with chopped vegetables and rolled into a kulcha that is served with garlic and chilli chutney. In Jammu region of J&K quintals of roasted Kalaris are sold every day.
Govt. is stressing on the value addition in agriculture and allied sectors and value addition in milk can help to open new avenues in J&K. Most of the area of J&K is hilly and about all the households in the rural areas are having cows and buffaloes. In the past there was sufficient availability of fodder as there were many meadows. There was lack of transportation facilities and it was difficult for the rural people to carry their milk to the urban areas. As milk is having a short shelf life so the people were processing their milk in the form of butter, ghee, cheese, kalari etc. They used to store these milk products and then after collection in large quantity, they were transporting these commodities in the urban areas. With the passage of time Kalari gained the recognition and now it has become a delicacy of Jammu region. It is a delicious item and is liked by everyone. Kalari has become a source of livelihood for the many farmers of J&K. Starter or Mathar plays a crucial role in the preparation of Kalari. It is prepared by mixing curd in lukewarm milk and then milk splits due to the curd reaction. Solid part is taken out and a proper circular shape is given to it. Then this product is dried after draining the excess liquid from it. The ultimate product in this process is called as Kalari. Kalari is very tasty and is having cheese like taste. The remained liquid is called as Mathar and is used to split the milk. Again the special shape is given to the product and this process is repeated for 4-5 days. Kalari has its own uniqueness and flavor. Bamboo baskets of plants leaves are used for the drying purpose of Kalari. Kalari from hilly areas of J&K has its own identity. There are certain specific hubs for Kalari making in the Jammu region of J&K. These areas are known for the quality Kalari. Women play a major role in Kalari making specially for the management of mulching animals. There is no milk storage facilities in the hilly areas of J&K so the women coagulate the milk to make the Kalari. Also there is poor road connectivity and lack of information in hilly areas. The middlemen purchase the Kalari from the farm women once or twice a week depending upon the availability of milk in the area. They weekly give the payment in cash. These middlemen then bring the Kalari in the urban areas and sale at a good price to the buyers. Price of Kalari increases with the movement of Kalari from one place to another.
Kalari is rich in nutrition and contains proteins, vitamins and minerals. In Jammu region of J&K Kalari-Kulcha is very famous and has its own delicacy. Kalari making requires skill and many institutions train the women farmers for its making. In this regards KVKs play the crucial role in imparting the skill on Kalari making to the farm women. By Kalari making entrepreneurship can be developed in the rural areas. Generally Kalari is served hot with tomatoes, bread, cabbage and onions. It can also be used in making curry. It can be kept for about one week under room temperature and can be stored for long time under refrigeration. Quintals of Kalari is prepared and sold daily in J&K. Kalari of Udhampur and Reasi districts are famous and is liked by everyone. There is need to promote Kalari of Jammu region so that the income and employment can be generated through Kalari making in rural areas of J&K. Kalari can be a boon to the farmers of J&K and special endevours are needed to promote it. Certain organized markets are needed to sale this produce.