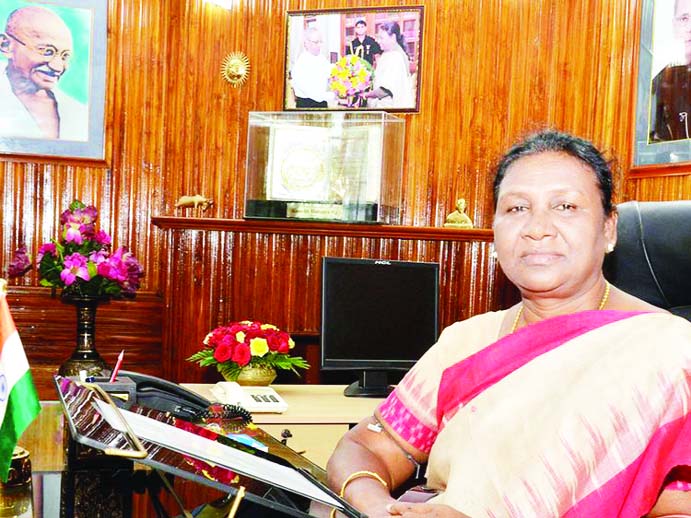 Jawahar Jalali
President of India Droupadi Murmu in her address to the nation on Independence Day eve,said that keyword for India today is compassion; for the downtrodden,for the needy and for those on the margins. Stating that some of our national values have been incorporated in our Constitution as the fundamental duties of the citizen,she appealed every citizen to know about their fundamental duties and follow them in letter and spirit so that our nation reaches new heights.
After independence in 1947 India has made tremendous progress in various spheres of activity more so in economic development. But despite welfare measures,the distribution aspect of this development has not percolated down properly to lower sections of society. After political change that occurred in the country following general elections in 2014, this aspect of development too has been taken care of more vigorously and the poverty line brought down but still much needs to be done to eliminate the evil of poverty completely.
The President appealed every citizen to know about their fundamental duties and follow them in letter and spirit. It is a common observation that in India a vast dichotomy exists between rights and duties. While we are keen about our rights we talk very rarely about our duties as citizens of free India. There is hardly any realisation that our fundamental rights entail responsibilities and fundamental duties. We also appear to be generally not aware about the dictum that a person`s rights start from where other`s rights end. In his `Man Ki Baat` programme from Akashvani on 29.1.20017, Prime Minister of India Narendra Modi spoke about rights and duties and need to bridge gulf between the two in our country.
Concept of duties has not been new to India as these have been a part of our traditions in various spheres of human activity from times immemorial. Long spell of foreign rule for over a millennium in our country had distorted our sense of rights and duties,drained us off of most of our own rich values and left us bereft of any positive inculcation of spirit of duties and responsibilities. Even concept of Dharma assiduously evolved in Hinduism had got much distorted. Cumulative effect of this long foreign subjugation had been that despite unique spiritual heritage we had turned into self-oriented individuals out to further our own interests at any cost. Even our value of co-relation of means and ends had got mauled.
Framers of Constitution of free India were conscious about it and had such a scenario in mind when they discussed,framed and finalised the Constitution of India. It guaranteed various fundamental rights to every citizen of India which are enumerated and defined in part III of the Constitution. These are enforceable by courts and broadly include right to equality,freedom of religion,freedom of speech and expression,right against exploitation,cultural and educational rights and right to constitutional remedies. In its section IV, the Constitution has also laid down directive principles enunciating fundamental obligations of State to its citizens. Though not enforceable by courts,these aim at making India a progressive and developed nation and welfare State.
Apart from these fundamental rights and directive principles,fundamental duties of the citizens of the country were incorporated in the Constitution of the country through forty second amendment to it in 1976.Like directive principles these too are not enforceable by courts but constitute moral obligations of the citizens of the country.
These include respect for our Constitution,pursuit of noble ideals laid down by our national struggle for independence,work for protecting our sovereignty, promotion of harmony and spirit of common brotherhood among all people transcending religious,linguistic and regional and sectional diversities,valuing and preserving our rich cultural heritage and protecting environment, safe- guarding public property and abjuring violence, developing scientific temper, humanism, spirit of enquiry and reform and striving for excellence in all spheres of individual and collective activity.
Time has come when people of India will have to bridge this wide gulf between our constitutional rights and duties vigorously. To examine lending legal support to the gigantic task, in February this year the Supreme Court asked Centre and State governments as to how they intend to sensitivise citizens on the importance of knowing their fundamental duties enshrined in our constitution. It also agreed to examine a PIL seeking that moral obligations of duties be converted into legal commitment by enacting a law.
After decades and for many years now India has a working, stable central government poised yet again for faster socio-economic growth in a more corruption free atmosphere. With this background as already pointed out by this writer in his article on “RIGHTS AND DUTIES” published on 24.2.2017 and with vast technological and other resources at their command, Government and people of India have to carry out this sustainable campaign with the same missionary spirit with which our leaders carried out successfully the freedom struggle. This has also to be done with the same zeal with which Ashoka erected his famous edicts in different and far flung areas of his vast empire over two thousand years ago to instill discipline,sense of duty, and moral values in the people.
(The author is former IIS Officer/ accredited freelance journalist and Producer)