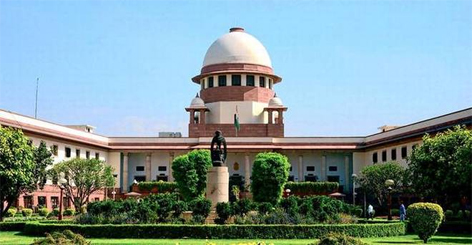 Sanjeev Pargal
JAMMU, Nov 8: As Supreme Court is scheduled to pronounce tomorrow its verdict in politically sensitive case of Ram Janambhoomi-Babri Masjid land dispute at Ayodhya, top brass of civil and police administration reviewed situation in the Union Territory of Jammu and Kashmir late tonight and ordered imposition of prohibitory orders under Section 144 for an indefinite period and closure of all educational institutions as precautionary measure in the entire UT.
Rapid Action Force (RAF) and para-military forces, which were already camping in the Union Territory since August 5 following scrapping of special Constitutional provisions and bifurcation of the erstwhile State into two UTs of J&K and Ladakh, have been deployed outside all vulnerable areas including religious places.
Chief Secretary BVR Subrahmanyam and Director General of Police (DGP) Dilbag Singh held emergency meetings with top brass of civil and police administration respectively and ordered enforcement of strict security arrangements in place to ensure that law and order situation is not disturbed.
Divisional Commissioner Jammu Sanjeev Verma told the Excelsior tonight that prohibitory orders effective from midnight tonight have been imposed in entire Jammu province for an indefinite period while all educational institutions (both schools and colleges) will remain closed tomorrow.
“All examinations scheduled for tomorrow have been postponed. No crowd of more than five persons will be allowed to assemble in any part of the region,” Verma said, adding that bursting of fire crackers has also been banned.
Saturday has been declared as a dry day, the Divisional Commissioner said.
Divisional Commissioner Kashmir Baseer Khan told the Excelsior that similar restrictions under Section 144 have also been imposed in the entire Valley where schools and colleges will too remain closed and exams stand postponed.
“Security arrangements have been beefed up in the entire Kashmir valley,” Khan said.
Sources said additional para-military forces and RAF have been deployed in all sensitive areas of Jammu region to prevent any untoward incident. All district police officers have been directed to keep strict vigil over the situation.
Chief Secretary BVR Subrahmanyam held emergency meeting tonight with top officials of the civil administration and was reported to have discussed steps required for maintenance of law and order situation and peace and normalcy in the Union Territory.
Director General of Police (DGP) Dilbag Singh too held special meeting with senior police officers and reviewed the situation and steps required to maintain peace in the Union Territory in the wake of crucial verdict on Ram Janambhoomi-Babri Masjid dispute.
PTI adds from New Delhi: The Supreme Court is scheduled to pronounce on Saturday its verdict in the politically sensitive case of Ram Janambhoomi-Babri Masjid land dispute in Ayodhya.
The apex court is likely to pronounce judgment at 10:30 am.
A notice regarding the pronouncement of judgment by a Constitution bench, headed by Chief Justice Ranjan Gogoi, was uploaded on the official website of the Supreme Court late today evening.
Other members of the bench are Justices S A Bobde, D Y Chandrachud, Ashok Bhushan and S Abdul Nazeer.
The bench on October 16 had reserved the judgment after marathon hearing of 40 days.
Hours before the notice, the CJI in the pre-noon held a meeting with Uttar Pradesh Chief Secretary Rajendra Kumar Tiwari and DGP Om Prakash Singh who apprised him about the security arrangements made to maintain law and order in the State.
The meeting was held in the CJI’s chamber, sources said.
Fourteen appeals have been filed in the apex court against the 2010 Allahabad High Court judgment, delivered in four civil suits, that the 2.77-acre land in Ayodhya be partitioned equally among the three parties — the Sunni Waqf Board, the Nirmohi Akhara and Ram Lalla.
Initially, as many as five lawsuits were filed in the lower court. The first one was filed by Gopal Singh Visharad, a devotee of ”Ram Lalla”, in 1950 to seek enforcement of the right to worship of Hindus at the disputed site.
In the same year, the Paramahansa Ramachandra Das had also filed the lawsuit for continuation of worship and keeping the idols under the central dome of the now-demolished disputed structure.
The plea was later withdrawn.
Later, the Nirmohi Akahara also moved the trial court in 1959 seeking management and ”shebaiti” (devotee) rights over the 2.77 acre disputed land.
Then came the lawsuit of the Uttar Pradesh Sunni Central Wakf Board which moved the court in 1961, claiming title right over the disputed property.
The deity, ”Ram Lalla Virajman”, through next friend and former Allahabad High Court Judge Deoki Nandan Agrawal, and the Janambhoomi (the birthplace) moved the lawsuit in 1989, seeking title right over the entire disputed property on the key ground that the land itself has the character of the deity and of a ”Juristic entity”.
Later, all the lawsuits were transferred to the Allahabad High Court for adjudication following the demolition of the disputed Ram Janmbhoomi-Babri Masjid structure on December 6, 1992, sparking communal riots in the country.
The Apex Court had on August 6 commenced day-to-day proceedings in the case as the mediation proceedings initiated to find the amicable resolution had failed.
It had taken note of the report of the three-member panel, comprising Justice FMI Kallifulla, spiritual guru and founder of the Art of Living foundation Sri Sri Ravishankar and senior advocate and renowned mediator Sriram Panchu, that mediation proceedings, which went on for about four months, did not result in any final settlement and it had to decide the matter pending before it.
Meanwhile, Prime Minister Narendra Modi today said the judgment “will not be a victory or defeat” for anyone.
In a series of tweets, the Prime Minister appealed to the people that the priority should be to strengthen India’s tradition of maintaining peace and harmony after the verdict is pronounced tomorrow.
“The Supreme Court verdict on Ayodhya would not be a matter of victory or loss. My appeal to countrymen is that it should be our priority that the verdict should strengthen India’s great tradition of peace, unity and amity,” he said.