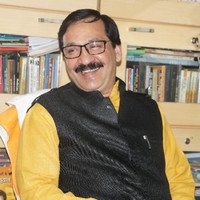 NEW DELHI:Professor Sanjay Dwivedi was on Wednesday appointed as the Director General of the Indian Institute of Mass Communication (IIMC) here, according to a Personnel Ministry order.

Dwivedi is at present Registrar of Makhanlal Chaturvedi National University of Journalism and Communication, Bhopal.

The Appointments Committee of the Cabinet has approved his appointment as the DG, IIMC on direct recruitment basis for a period of three years, the order said.

The post of the head of one of the premier institute of journalism and mass communication was lying vacant for over a year.

K S Dhatwalia, Principal Director General in the Press Information Bureau, has been holding the additional charge of the post of DG, IIMC since June 1, 2019, officials said.

Candidates were shortlisted for the post of DG, IIMC on the basis of applications received in response to an advertisement issued last year, they said.

Professor Dwivedi was on the top in a panel of three candidates shortlisted for the post and later sent to the Appointments Committee of the Cabinet, the officials said.

The IIMC, an autonomous institute under the Ministry of Information and Broadcasting, was set up in 1965. (AGENCIES)