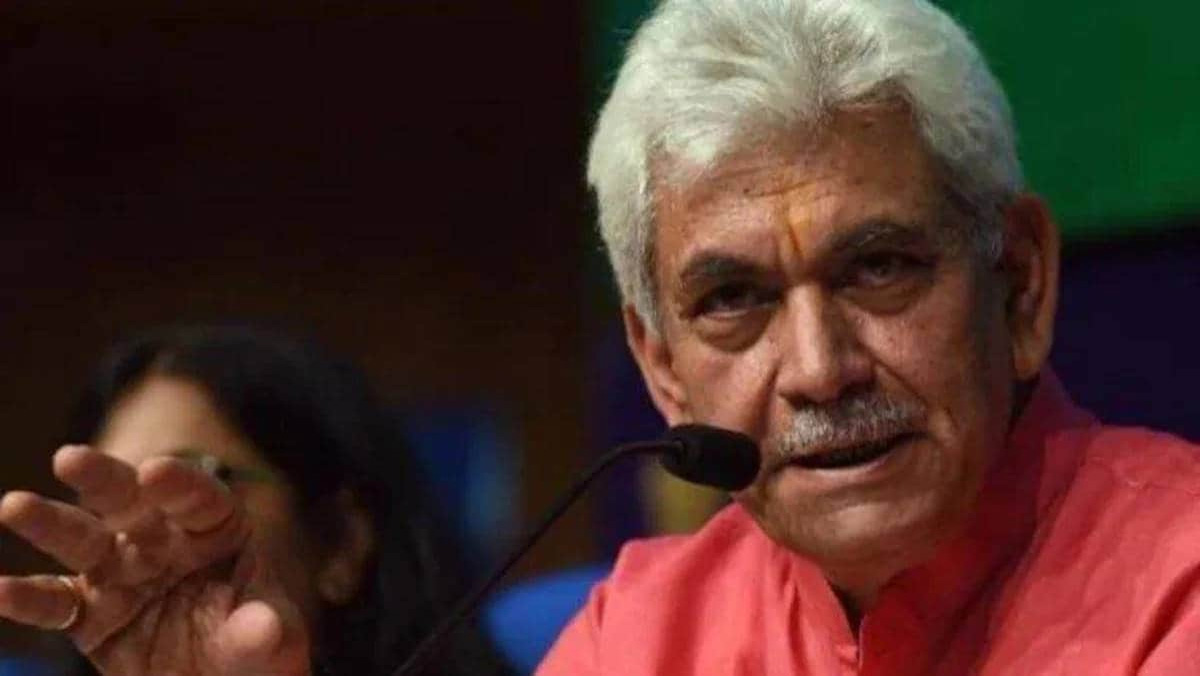 JAMMU, Dec 4: Lieutenant Governor Manoj Sinha said today that some elements working at the behest of neighbour in Jammu and Kashmir have been identified and the Government will take action against them even as he justified the deployment of additional Central Armed Police Forces (CAPFs) in Kashmir to end dominance of the militants in certain pockets.
Click here to watch video
He announced that enquiry into Hyderpora encounter in Srinagar will be completed within the next three days and if anyone was found guilty, action will be taken against him.
Sinha was speaking at ‘Agenda Aaj Tak’ in New Delhi this afternoon.
Without naming Pakistan, the Lieutenant Governor said: “Neighbour remains a problem. At the same time, there are certain elements here also (Jammu and Kashmir) who have been working at the instance of neighbour. They have been identified. We will take action against them”.
Asserting that terror and violence are two separate things. Sinha, in response to a question on local youth joining the militancy, said some misled youth might have joined the militancy but the security forces are working on how to bring them back.
To a question on rehabilitation of Kashmiri Pandits back to the Valley, he said the Government is working on a plan which the country will know after three months of winter. He clarified that 6000 jobs and construction of an equal number of houses in Kashmir alone can’t be part of the Rehabilitation Plan for the migrants.
On deployment of more security forces in Kashmir, Sinha said no additional battalions of Army have been moved in the Valley.
“However, the Government is trying to control situation in the areas where there is dominance of the militants and where they are getting oxygen. If five additional companies of para-military forces have been deployed in such areas, there is nothing wrong. We fully ensure that the civilians are not harmed,” he added.
On Hyderpora encounter in Srinagar district last month, the Lieutenant Governor said the enquiry report will be available in three days.
“I assure that if any innocent is killed whosoever is found responsible, he will be punished,” he declared.
It may be mentioned here that four militants were killed in Hyderpora last month but some political parties and locals had claimed that some of them were civilians.
Maintaining that efforts are on to tackle terror and terror-funding, Sinha recalled that earlier the separatists, who were threat to the nation, used to be taken by air to New Delhi and said there will be no talks with separatists now but those who believe in India.
“Talks will be held with people of Kashmir,” he asserted.
Asserting that number of tourists visiting Kashmir has gone up from 10.5 lakh in July to 13.46 lakh in November, the Lieutenant Governor assured people of the country that they can visit the Valley and their security is responsibility of the Government.
“If one compares the tourist influx of eight years, it has increased. In July, 10.50 lakh tourists came to Jammu and Kashmir. The number increased to 11.28 lakh in August. It crossed 12 lakh in September and in November 13.46 lakh tourists visited Jammu and Kashmir. Number of flights arriving in Srinagar has gone up. Hotel bookings have witness sharp rise,” he said.
Replying to a question on corruption, Sinha said: “Where there are humans, there would be corruption. Use of technology will bring transparency. We are moving towards that system.”
Sinha evaded a response on former Governor of Jammu and Kashmir Satya Pal Malik, current Governor of Meghalaya who recently criticised the present administration of the Union Territory. Malik had said that during his days as Jammu and Kashmir Governor, the terrorists did not dare to come within 50 kilometres of Srinagar. The situation under the current administration is different, he had stated.
Sinha said, “Satya Pal Malik is a friend of mine. I don’t have the experience with the Army that he has. I won’t comment on what he said.”
On holding of Assembly elections in Jammu and Kashmir, Sinha reiterated his stand that Prime Minister (Narendra Modi) and Union Home Minister (Amit Shah) have made it clear that the polls will be held after completion of delimitation exercise.
“There is no reason that election will not be held in J&K,” he added.
On Pakistan’s denial to use of its airspace by Srinagar-Sharjah international flight, the Lieutenant Governor said GoAir has suffered economic loss due to the decision but the Government is trying to cut the cost by using it for cargo.
On power cuts, he said the Government is working in the direction to provide reliable 24×7 reliable power to all citizens of Jammu and Kashmir.