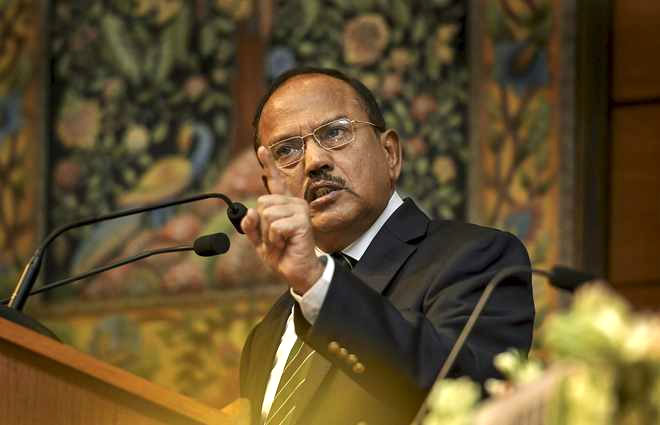 New Delhi, Dec 6: The NSAs of India and Central Asian nations on Tuesday agreed that connectivity initiatives should be based on principles of transparency and respect for the sovereignty and territorial integrity of all countries, a position seen as a tacit endorsement of New Delhi’s views on China’s Belt and Road Initiative (BRI).
The issue figured at the first India-Central Asia meeting of national security advisors hosted by NSA Ajit Doval, who said New Delhi stands ready to “cooperate, invest and build connectivity” in the region.
In his inaugural address, Doval also said connectivity projects should respect the sovereignty and territorial integrity of countries.
At the meeting, the officials highlighted the important role that Chabahar port in Iran played during the humanitarian crisis in Afghanistan and supported India’s proposal to include it within the framework of the International North-South Transport Corridor (INSTC).
A joint communique issued at the end of the meeting said the officials reiterated that greater connectivity could be a force multiplier for enhancing trade and commerce as well as closer interactions between India and Central Asian countries and accordingly “deserved priority attention”.
“They agreed that connectivity initiatives should be based on the principles of transparency, broad participation, local priorities, financial sustainability and respect for sovereignty and territorial integrity of all countries,” it said.
India has been severely critical of China’s ambitious Belt and Road Initiative (BRI) as China-Pakistan Economic Corridor (CPEC), part of the multi-billion dollar connectivity project, passes through Pakistan-occupied Jammu and Kashmir (PoJK).
“While expanding connectivity, it is important to ensure that connectivity initiatives are consultative, transparent and participatory, with respect for sovereignty and territorial integrity of all countries,” Doval said.
The NSAs of India, Kazakhstan, the Kyrgyz Republic, Tajikistan and Uzbekistan participated in the meeting. Turkmenistan was represented by its ambassador in New Delhi.
China also faced criticism for creating debt traps for a number of countries while pushing projects under the BRI. Several African countries are finding it difficult to repay loans provided by China for BRI projects.
Boosting connectivity, including making the Chabahar port in Iran a part of the International North-South Transport Corridor, also figured in the discussions at the meeting of the NSAs.
Located in the Sistan-Balochistan province on the energy-rich Iran’s southern coast, the Chabahar port is being developed by India, Iran and Afghanistan to boost connectivity and trade ties.
The meeting emphasised the important role that Chabahar Port played during the humanitarian crisis in Afghanistan and its immense potential in enhancing trade and connectivity, as well as the logistics infrastructure of the Central Asian countries in the delivery of humanitarian goods to the Afghan people by international organisations, the joint statement said.
“They also took note of the increase in trade between India and Central Asian countries through the Shaheed Beheshti Terminal, Chabahar Port and discussed further development of this transport corridor,” it said.
“The participants supported India’s proposal to include the Chabahar port within the framework of INSTC,” it added.
At a connectivity conference in Tashkent in July last year, External Affairs Minister S Jaishankar projected Iran’s Chabahar Port as a key regional transit hub including Afghanistan.
The INSTC is a 7,200-km-long multi-mode transport project for moving freight among India, Iran, Afghanistan, Armenia, Azerbaijan, Russia, Central Asia and Europe.
“India and Central Asian member countries of the INSTC as well as the Ashgabat Agreement on International Transport and Transit Corridor called upon other Central Asian countries to consider joining these initiatives,” the joint communique said. (Agencies)