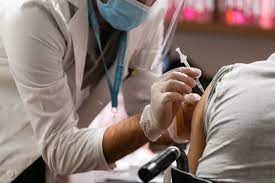 New York, Jan 20: A new study in two states that compares coronavirus protection from prior infection and vaccination concludes getting the shots is still the safest way to prevent COVID-19.
The study examined infections in New York and California last summer and fall and found people who were both vaccinated and had survived a prior bout of COVID-19 had the most protection.
But unvaccinated people with a past infection were a close second. By fall, when the more contagious delta variant had taken over but boosters weren’t yet widespread, that group had a lower case rate than vaccinated people who had no past infection.
The Centers for Disease Control and Prevention, which released the study Wednesday, noted several caveats to the research. And some outside experts were cautious of the findings and wary of how they might be interpreted.
“The bottom line message is that from symptomatic Covid infection you do generate some immunity,” said immunologist E John Wherry of the University of Pennsylvania. “But it’s still much safer to get your immunity from vaccination than from infection.”
Vaccination has long been urged even after a prior case of COVID-19 because both kinds of protection eventually wane — and there are too many unknowns to rely only on a past infection, especially a long-ago one, added immunologist Ali Ellebedy at Washington University in St. Louis.
“There are so many variables you cannot control that you just cannot use it as a way to say, Oh, I’m infected then I am protected,'” Ellebedy said.
The research does fall in line with a small cluster of studies that found unvaccinated people with a previous infection had lower risks of COVID-19 diagnosis or illness than vaccinated people who were never before infected.
The new study’s findings do make sense, said Christine Petersen, a University of Iowa epidemiologist. She said a vaccine developed against an earlier form of the coronavirus is likely to become less and less effective against newer, mutated versions.
However, experts said, there are a number of possible other factors at play, including whether the vaccine’s effectiveness simply faded over time in many people and to what extent mask wearing and other behaviours played a part in what happened.
Another thing to consider: The “staunchly unvaccinated” aren’t likely to get tested and the study only included lab-confirmed cases, Wherry said.
“It may be that we’re not picking up as many reinfections in the unvaccinated group,” he said.
CDC officials noted other limitations. The study was done before the omicron variant took over and before many Americans received booster doses, which have been shown to dramatically amplify protection by raising levels of virus-fighting antibodies. The analysis also did not include information on the severity of past infections, or address the risk of severe illness or death from COVID-19.
The study authors concluded vaccination “remains the safest strategy” to prevent infections and “all eligible persons should be up to date with COVID-19 vaccination.”
The researchers looked at infections in California and New York, which together account for about 18 per cent of the US population. They also looked at COVID-19 hospitalizations in California.
Overall, about 70 per cent of the adults in each state were vaccinated; another 5% were vaccinated and had a previous infection. A little under 20 per cent weren’t vaccinated; and roughly 5 per cent were unvaccinated but had a past infection.
The researchers looked at COVID-19 cases from the end of last May until mid-November, and calculated how often new infections happened in each group. As time went on, vaccine-only protection looked less and less impressive.
By early October, compared with unvaccinated people who didn’t have a prior infection, case rates were: six-fold lower in California and 4.5-fold lower in New York in those who were vaccinated but not previously infected.
Also, the case rates were 29-fold lower in California and 15-fold lower in New York in those who had been infected but never vaccinated, and 32.5-fold lower in California and 20-fold lower in New York in those who had been infected and vaccinated.
But the difference in the rates between those last two groups was not statistically significant, the researchers found.
Hospitalization data, only from California, followed a similar pattern. (AGENCIES)