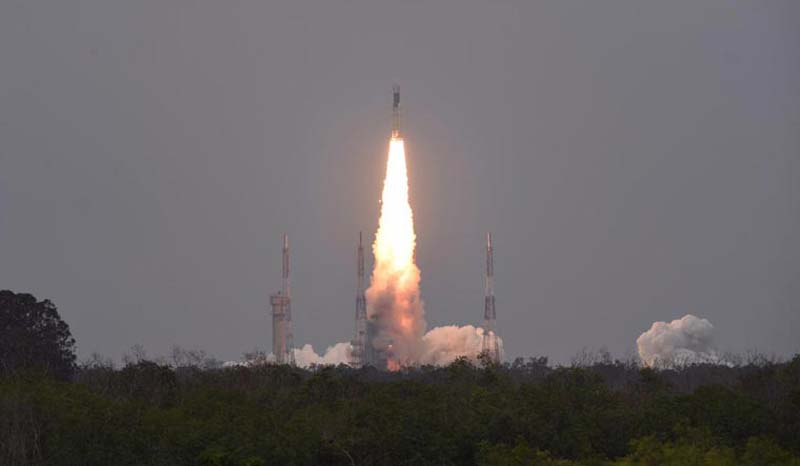 NEW DELHI, July 22:  President Ram Nath Kovind, Vice President Venkaiah Naidu, Prime Minister Narendra Modi and leaders across party lines today hailed the launch of India’s second lunar mission Chandrayaan-2 from the spaceport in Sriharikota.
These leaders also congratulated the ISRO scientists and engineers for the “historic launch”, and said it was a proud moment for all Indians.
The mission is expected to lead to new discoveries and enrich India’s knowledge systems, Kovind said.
In a series of tweets, Modi said every Indian is immensely proud today.
Referring to the indigenous systems used in Chandrayaan-2, he said the mission is “Indian at heart, Indian in spirit!…Efforts such as Chandrayaan-2 will further encourage our bright youngsters towards science, top quality research and innovation.”
The Prime Minister also shared pictures of him watching the launch on a large screen and shared his audio message to the Indian Space Research Organisation (ISRO) after the successful launch.
Congratulating the ISRO, BJP President and Home Minister Amit Shah said they have set another benchmark in the field of space technology and that a grateful nation is proud of the ISRO scientists.
“I also thank PM Modi ji for encouraging our institutions for setting new standards every time,” Shah said in a tweet.
Congress hailed team ISRO for the successful launch of Chandryaan2, but also sought to claim credit for India’s advancement in space exploration, citing the contribution of its Prime Ministers.
“This is a good time to remember the visionary move of India’s first PM Pandit Jawahar Lal Nehru to fund space research through INCOSPAR in1962 which later became ISRO. And also Dr. Manmohan Singh for sanctioning the #Chandrayan2 project in 2008,” the party said in a tweet from its official Twitter handle.
Congress’ chief spokesperson Randeep Surjewala also hailed the launch, saying India’s tryst with destiny continues.
“There are defining moments like these that make us a great nation. My gratitude to all scientists and space engineers at ISRO who have toiled day & night to make 130 cr Indians proud!” he said in a tweet.
A day before the launch, senior Congress leader Anand Sharma had said India’s space journey began with Pandit Jawahar Lal Nehru and took a giant leap in 1975 with the launch of Aryabhat, led by “charismatic PM Indira Gandhi”.
“ISRO has many notable achievements including Chandrayaan (2008) and Mangalayaan (2013). Wishing Team ISRO all the best for Chandrayaan2,” he had said in a tweet.
Defence Minister Rajnath Singh on Monday said team ISRO scripted a new chapter in India’s space history with the launch of this ambitious and indigenous Mission to moon.
“Today’s launch of Chandrayaan 2 reflects India’s growing prowess in space technology. Congratulations Team!,” Information and Broadcasting minister Prakash Javadekar said.
BJP’s working president J P Nadda also hailed the lauched and congratulated ISRO scientists for making Indians proud.
Delhi Chief Minister Arvind Kejriwal said the country is proud of the historic achievement of ISRO scientists.
Former President Pranab Mukherjee said the launch was an extremely proud moment for the nation.
“Having closely observed Chandrayaan1 & MOM (Mars Orbiter Mission) in the Government, I commend our brilliant scientists at ISRO for their stupendous progress over the years,” he said.
The geosynchronous satellite launch vehicle lifted-off from the Satish Dhawan Space Centre at 2.43 pm and successfully placed the 3,850-kg Chandrayaan-2 into the earth orbit about 16 minutes later.
The mission’s success brought in huge relief for ISRO scientists after the July 15 launch was called off just about an hour left following a technical glitch in the rocket.
The Rs 978 crore mission, that will mark a giant leap in India’s space research and make it only the fourth country to have landed a rover on Moon. (PTI)