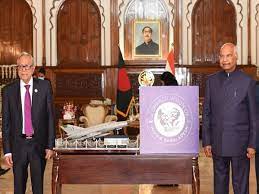 DHAKA, Dec 16:  President Ram Nath Kovind has presented a replica of the 1971-era MIG 21 aircraft to his counterpart Abdul Hamid here to commemorate the joint sacrifices made by the armed forces of India and Bangladesh during the 1971 liberation war.

President Kovind is here on a three-day state visit, his first trip abroad since the outbreak of the COVID-19 pandemic, to participate in the commemoration of the 50th anniversary of Victory Day on Thursday at which he is the guest of honour.

“The original aircraft has been installed at the Bangladesh National Museum. This is also in tribute to the memory of the over 1,660 Indian Armed Forces personnel who sacrificed their lives for a common cause in the liberation of Bangladesh,” Foreign Secretary Harsh Vardhan Shringla said.

In a reflection of close ties, India is also hosting a number of events to mark the 50th anniversary of the 1971 India-Pakistan war that led to the liberation of Bangladesh.

President Kovind has also announced the gifting of the Bapu Bangabandhu Digital exhibition to Bangladesh, which will be now housed in the Liberation War Museum, the Foreign Secretary during a press briefing here on Wednesday night.

The Indian government has also decided to review the Nutan India-Bangladesh Maitree Muktijodha Sonatan Scholarship Scheme for the heirs of Bangladesh muktijodhas.

“The scheme was launched in April 2017, during the visit of Prime Minister Sheikh Hasina to India,” Shringla said.

During this scheme, the Government of India had sanctioned over 10,000 scholarships for heirs of Muktijodhas for over five years.            Undergraduate students will get a one-time grant of Taka 50,000 and Higher Secondary students Taka 20,000 respectively.

These scholarships for Bangladeshi students were introduced to further enhance relations between the two countries.

Shringala also welcomed the appointment of the ‘Bangabandhu Chair’ at the Delhi University.

In March this year, the Indian Council for Cultural Relations had established this position to honour Bangladesh’s founding father Sheikh Mujibur Rahman.

On Wednesday, former Bangladesh secretary Shahidul Haque was appointed the first occupant of the prestigious ‘Bangabandhu Chair’ at the Delhi University by the Indian Council for Cultural Relations.

“When our Prime Minister Narendra Modi visited Bangladesh in March this year, he announced the creation of the Bangabandhu Chair at Delhi University. The first occupant of this chair was announced today by the Indian Council for Cultural Relations,” Shringla explained. (PTI)