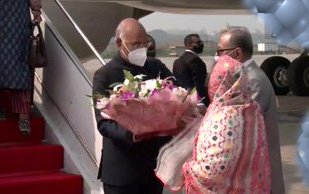 Bangladesh, December 15 : President Ram Nath Kovind arrived in Dhaka on Wednesday and was received by Bangladesh President Abdul Hamid and First Lady Rashida Hamid upon his arrival. President is on a three-day visit to Bangladesh from December 15-17 to attend the country’s 50th Victory Day celebrations as a guest of honour. “This visit is in context of 50th Victory Day celebrations in Dhaka at which Bangladesh President Abdul Hamid has invited President Kovind to represent India as a guest of honour,” Foreign Secretary Harsh Vardhan Shringla said on Tuesday during a press briefing. This is the maiden visit of President Kovind to Bangladesh since the COVID-19 outbreak. The President’s visit provides an opportunity to renew India’s bonds with Dhaka, Shringla said that the relations are based on a shared geographical space, heritage, history and shared experience of New Delhi’s support to Bangladesh during its war of liberation. “It is also an occasion to take note of the width, depth, vitality and dynamism of the contemporary ties,” Shringla added. During the visit, the President will hold a delegation-level meeting with Hamid. Meanwhile, Bangladesh Prime Minister Sheikh Hasina and Foreign Minister Dr A K Abdul Momen are scheduled to call upon the President, the Ministry of External Affairs had earlier said in a press release. (Agencies)