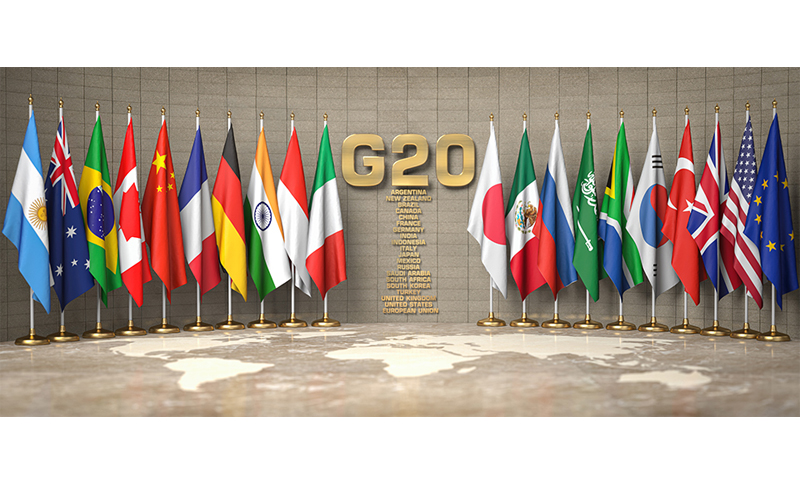 Formed in 1999 after Asian financial crisis with an aim to have consultation group of Finance Ministers and Central Bank Governors but later on upgraded it to head of member states and right now it accounts for 85% of world GDP, represents 60% of Global population with 75% of global trade-with USA, European Union, Russia, China among the members-Group of Twenty is one of the most powerful organisation of the World Power Structure. Though initial focus was on macroeconomics policies but right now trade, climate change, sustainable development, energy, environment, climate change, corruption are under its ambit. Unlike UNO it has no permanent secretariat , Troika of Present, Past and Future President countries with the help of Sherpas, who are representative of Troika leaders, work on negotiations items for Summit throughout the year. Different working groups work behind the scene for settlement of different issues. Every year number of non member invitees are also there, Spain is permanent invitee and all leading world organisations like IMF, World Bank, UN, OEC, WTO, ILO, ASEAN, the African Union to name few are regular participants of G20. In wake of 2008 financial crisis, G-20 initiated stringent economic reforms with an agreement to blacklist countries who refuse to cooperate on issues of tax evasion and refusal to share information, stricter control on hedge funds and rating agencies. Formation of Financial Stability Board was subsequently done. Efforts are always there in G20 to remove barriers of trade and investment. Stricter regulations on banking sectors and Seoul Consensus of development policy issues on Summit’s Agenda are few historic moments. Agricultural Market Information System for food coordination, unemployment, social security and fair income for all were added agendas later on. Time to time issues like tax information, minimising profits, increasing collective GDP, common reporting system for Automatic Exchange of Tax Invasion are taken up. Keeping in view focus on women empowerment, reducing gender inequality in workforce by 25% by 2025 is targeted. Refugee movement, migration and global climate agreement are other achievements of G20 summits. Fight against terrorism, Digital Economy, Paris Agreement on emission norms are other focus areas of G20.
With so much importance, influence and legacy of G20 on world canvass, Presidency itself is an honor to lead world leaders. With stature also comes the responsibility, to lead by example at this critical juncture when recession is knocking at doorsteps of every country amid a war between Russia and Ukraine, more importantly energy crisis in world due to ongoing war and sanctions and counter sanctions going on. It will be tough for India to do the balancing act between different world powers. PM Modi has broadly set the tone of Indian strategy and agenda, simply Vasudhaiva Kutubakam, world is one, each one sharing resources equally, Sabka Saath Sabka Vikaas, delivering everything to the last man standing in the row. It’s a time to unfold India to the world, a glimpse of what a diversified cultural bounty we have. PM’s vision and message is clear, showcase your heritage and culture to visiting delegates and they will be our future messengers for tourism. India is Vishwaguru in many things and it’s time to assert Indian dominance on world platform. The unity in diversity, what we have in India is itself a glorifying example of what India has achieved by ahinsa and how peacefully world can live together with no need to show aggression on fellow human beings. India is pioneer in innovations and to our credit every Indian state is a country in country itself showcasing different languages, different eating habits, factually as unique as possible but united with beads of totality. Though numerous challenges are there but no doubt India has arrived with a thunder on world forum.