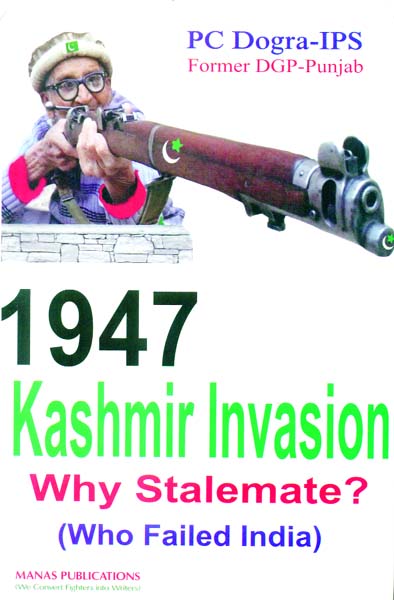 O P Sharma
A new exhaustive and authoritative book entitled : “1947 Kashmir Invasion- Why Stalemate ? ( Who Failed India)” by a competent author P C Dogra, an IPS officer who held key posts, has recently hit the market. It is an historical and well documented account which has thoroughly and judiciously gone into the factual records, quoted concrete evidence and made impartial assessment of the key persons and their role in bringing the matters to stalemate in erstwhile Jammu and Kashmir State by making it a “ constant bleeding sore” which became centre of much geo-politics for quite long years.
There are numerous volumes on Kashmir and many versions of the happenings in this part of the Indian sub-continent. The entire environ was further confused and made complex. But now for the first time this author, PC Dogra has, in fact, brought the bare and true facts to the fore before the readership. This is the most important merit of this well-researched and impartial work.
Facts & Reality Only
This 264-page book reveals many hidden facts, expressed without fear or favour, has made an objective assessment based on documents and concrete evidence presenting it all in a very simple but stylish language.
It is well recognised knowledge that there would have been no so-called “ problem “ or “issue” about Jammu and Kashmir, had the main actors played their pivotal role and shouldred resposiblities in a saner manner playing their part with historical sense and not swayed by personal prejudices or petty enemity factors but based their critical role with eagle eye on foreign interventionist designs against our interests. Many faultlines have been exposed in this informative and interesting book.
Numerous Faultlines
The author squarely lays blame on the top-most leadership during that critical period (1947) when erstwhile J&K State was raided by Pak-aided tribesmen and the people ware faced with unprecedented worst situation created by British evil designs and also of perpetuating the stalemate of “discourd and distrust”.
The seeds were sown by some of our top leadership as also the deep role of conspiracy hatched by the Lord Mountbatten who used all means to involve major characters on the scene at that crucial pre- and post-Partition period of our history. The stage was also shifted at international level by nefarious designs against vital interest of our people. Who did it is well known.
Inside Story Out
The book is divided into 15 chapters and each touching the vital aspects and narration of events, role of our the then top leadership, exposure of hidden foreign-hand in instigating the trouble and also actively play upon personal follies of our top leadership. Mahatma Gandhi’s sane advice was brushed aside and permanent “artificial sore” created .
Some of the chapter pin-pointing inadequate J&K Forces then working under Bristish Army Officers, explosure of Pak’s Operation Gulmarg; “, Why Indian Forces failed to reach Muzaffarabd? And Mountatten wanted statlemate and not decisive defeat of Pakistan in 1947 attack on earstwhile J&K State and illegal occupation of one-third of its terrirtory till this date. There are interesting and revealing facts and narration for the readership.
Complex Questions
“Was Nehru under emotional influence of Lord Mountbatten and Lady Edwina ?”, “Mahajara Hari Singh Treated Shabbily by Nehru, Helpless Sardar Stood by Him” and yet another chapter “ Pt Nehru himself was anti-Maharaja”; “Mountbatten pressurised Nehru for reference to UNO”; “ Sheikh Abduulah danced on the Political Stage to no Consistent Rhythm” and also a piece “ Sheikh Abdullah earlier rebuffed by Jinnah exploited Nehru with Plebiscite Trump Card” are some of the contents which throw ample new light on the vital aspects of our history as facts on file.
The author P C Dogra, is an ex-Indian Army Emergency Commission officer who fought Indo-Pak 1965 war and later joined Punjab cadre IPS and remained on many sensitive positions and postings. Among other things, he remained IGP of BSF in Jammu and Kashmir during a crucial period and organised anti-militancy operations and also has worked with distinction on some other assignments as well. This book is his monumental work.
LaudIAble Contribution
But his contribution of three books: Changing Perspective on National Security; Threat to Security: How secured is India from Within and Mumbai Siege” “ Enough is Engouh, Should be our Response ? He is regularly contributing articles on security matters. Besides, in 2003 he set up at Chandigarh a “Forum on Integrated National Security”.
This book has thrown ample light on some of the darkness and brought the truth to the fore-front at this crucial juncture of our history. While the author deserve our salutations, the publishers too should be complimented for their bold and decisive contribution!
This book is a tangible and rare service by a security expert on the affairs in Jammu and Kashmir shedding ample and true light on dark shadows as also exploring various crtical aspects of happenings, focuses on events and top leaderships having bearing on our history as also shape our future. It is a must read book for everyone, in whatsoever field and especially all those interested to understand about proper perspective and projection of Jammu and Kashmir’s past, present and future.
(Starline Syndicate Service)