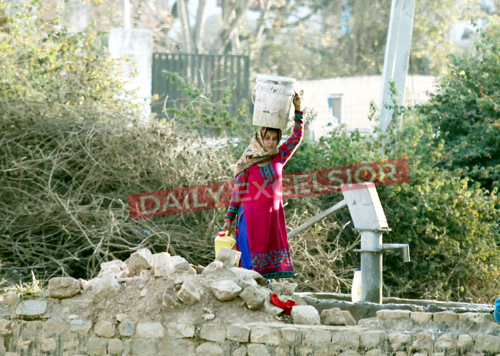 Nishikant Khajuria
JAMMU, May 30: As the mercury continues to soar above 40 degree Celsius in the region, electricity and water crisis further worsens in Jammu where people are suffering because of the prevailing situation while Ministers in the State Government and public representatives prefer to put their stay in Kashmir valley.
The intense heat wave is leading to power shutdowns and tripping of the system, which in turn severely affecting water supply thus multiplying woes of the Jammuites, who are left with no option other than to curse the Government for the crisis.
Notwithstanding the Power Minister’s direction for no planned shutdown in the region owing to scorching heat, electricity supply in various parts of Jammu remains off for hours together.  “Our system and supply are not adequate to ensure no power cut, particularly during the summer month, when the transformers and circuit get damaged because of intense heat,” explained an officer in the Power Development Department on the condition of anonymity.
This afternoon, Current Transformer (CT) of 132 KV got damaged at Gladni around 3.40 pm thus snapping the power supply on Gladni-Janipur Circuit I and II.  The power supply was not fully restored till filing of this report.
The consequent affect of frequent power breakdowns on water scenario can be gauged from the fact that power tripping for only  one and half hour hampers supply of  around 7.5 lakh Gallon water and the system used to experience  power tripping for several  times a day.
In the summer at peak and owing to power tripping problem, various areas of Jammu are reeling under water scarcity. These areas include Keran, Chinore, Roop Nagar, Muthi, Durga Nagar, parts of   Old City, Bhatindhi, Sunjwan, Channi, Chowadi, Sainik Colony and Sidhra etc.
Even as the water scarcity is a routine feature in Jammu, particularly during the summer months, the State Government has neither some long term nor short term planning to meet the crisis.
Official sources informed the Excelsior that there was demand of 65 million gallons water per day in the Jammu Urban area whereas the supply was only 50 million gallons with the result that there is shortage of 15 million gallon water each day.
Further, the Department of PHE has only 82 tankers in entire Jammu province for supply of water to the areas reeling under scarcity. While 13 such tankers are catering to the area in Gandhi Nagar Assembly constituency, 12 are being used for water supply in Jammu West and Jammu East, sources added.
When contacted, Chief Engineer PHE, Ashok Gandotra admitted water scarcity in various parts of Jammu but claimed that tripping of power was the main reason behind the inadequate supply even as drying up of Tawi river and decreasing ground water level because of intense heat are the other factors contributing to the crisis.
“To cope up with the crisis, we have pressed into service some private tankers also for supply of water to the affected areas while 49 locations have been identified for new tube wells, which will fulfill the gap of 15 million gallons per day between the demand and availability,” he added and hoped that the situation would improve with some change in weather or even slight showers in the region.
Pertinent to mention that the maximum temperature in Winter Capital of the State  had crossed 40 degrees Celsius mark  on May 22 for the first time this season and is on increase since  then, touching 43.5 degrees Celsius yesterday, the highest in the month of May over the past three years.
The maximum temperature in Jammu is around 3 degrees Celsius above the normal during while the minimum temperature is around 4 degrees above normal.