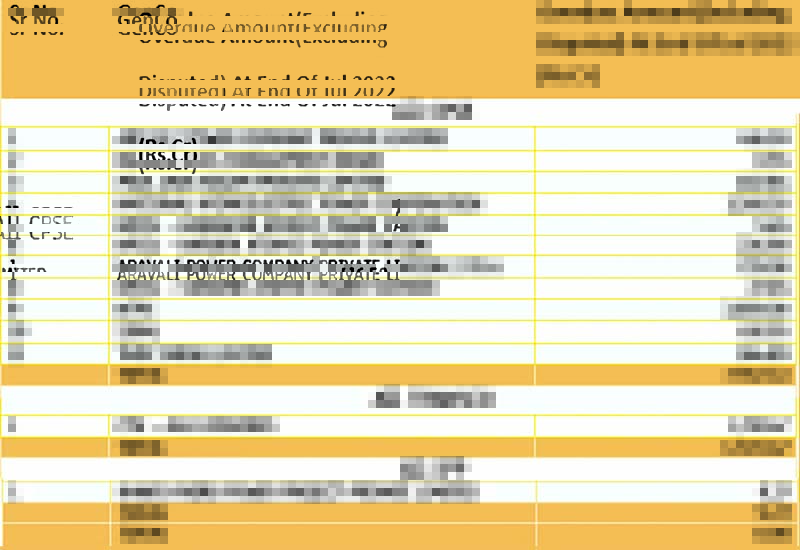 Gopal Sharma
JAMMU, July 3: While the total outstanding dues owed by electricity Distribution Companies (Discoms) to power producers in the country has reached up to Rs 1,32,432 crore in June 2022, the total power over due amount of J&K UT has goneup to whopping Rs 9642.15 crores.
Power Distribution Companies (Discoms) in Maharashtra, Tamil Nadu, Telangana, Andhra Pradesh, Uttar Pradesh, Jammu & Kashmir, Karnataka, Madhya Pradesh, Jharkhand and Rajasthan accounted for the major portion of dues to Power Generations Companies (Gencos).
Official sources told the Excelsior that the overdue amount (excluding disputed) of the Union Territory of J&K for the consumption of electricity as in July 2022 has gone up to Rs 9642.15 crores. Among all the Power Generation Companies, the highest overdue amount of Rs 3859 crores pertained to National Thermal Power Corporation (NTPC), followed by National Hydroelectric Power Corporation whose overdue amount has gone up to Rs 1268.50 crores.
Giving break up, the sources further revealed that J&K Power Distribution Companies owed an amount of Rs 416.59 crores to Aravali Power Company Pvt Ltd, Rs 55 lakhs to Bhakhra Beas Management Board, Rs 402.84 crores to Meja Urja Nigam Pvt Ltd, Rs 610 crores to SJV Nigam Ltd, Rs 364.89 crores to THDC India Ltd, Rs 729 crores to NPCIL-Rajasthan Atomic Power Station, Rs 226.98 crores to NPCIL-Narora Atomic Power Station, Rs 27.65 crores to NPCIL-Tarapur Atomic Power Station, Rs 5.45 crore to NPCIL-Kakrapar Atomic Power Station and Rs 9.27 crores to Khari Hydro Power Project Pvt Ltd (IPP).
Besides this, the J&K UT Power Distribution Companies have outstanding dues amounting to Rs 1720.47 crores of all the transmission companies as on ending June 2022.
Sources further said that Discoms owed a total of Rs 1, 27,306 crore to power generation firms in June 2021 in the country as per the portal PRAAPTI (Payment Ratification And Analysis in Power procurement for bringing Transparency in Invoicing of generators).
On a sequential basis, total dues in June increased from Rs 1,30,139 crore in May 2022.
The PRAAPTI portal was launched in May 2018 to bring transparency in power purchase transactions between generators and Discoms.
In June 2022, the total overdue amount, which was not cleared even after 45 days of grace period offered by generators, stood at Rs 1,15,128 crore as against Rs 1,04,095 crore in the same month a year ago. The overdue amount stood at Rs 1,07,636 crore in May 2022.
Power producers give 45 days to Discoms to clear bills for electricity supply. After that, outstanding dues become overdue and generators charge penal interest on that in most cases. To give relief to Power Generation Companies (Gencos), the Centre enforced a payment security mechanism from August 1, 2019. Under this mechanism, Discoms are required to open letters of credit for getting power supply.
It said the Centre had also given some breathers to Discoms for paying dues to Gencos in view of the COVID-19-induced lockdown. The Government had also waived penal charges for the late payment of dues.
In May 2020, the Government had announced a Rs 90,000-crore liquidity infusion for Discoms under which these utilities got loans at economical rates from Power Finance Corporation (PFC) and REC Ltd.
This was a Government initiative to help Gencos remain afloat. Later, the liquidity infusion package was increased to Rs 1.2 lakh crore and further to Rs 1.35 lakh crore.
Overdue of independent power producers amounted to 53.17 per cent of the total overdue of Rs 1,15,128 crore of Discoms in June 2022.
The proportion of Central PSU Gencos in the overdue was 22.4 per cent.
Among the Central Public Sector Gencos, NTPC alone has an overdue amount of Rs 5,441.95 crore on Discoms, followed by DVC at Rs 3,885.19 crore and NPCIL at Rs 3,272.24 crore, in June, 2022.
Among private generators, Discoms owed the highest overdue amount of Rs 21,625.02 crore to Adani Power in the month under review. The overdue of non-conventional energy producers like solar and wind stood at Rs 22,432.27 crore in June, 2022, the Govt data revealed.