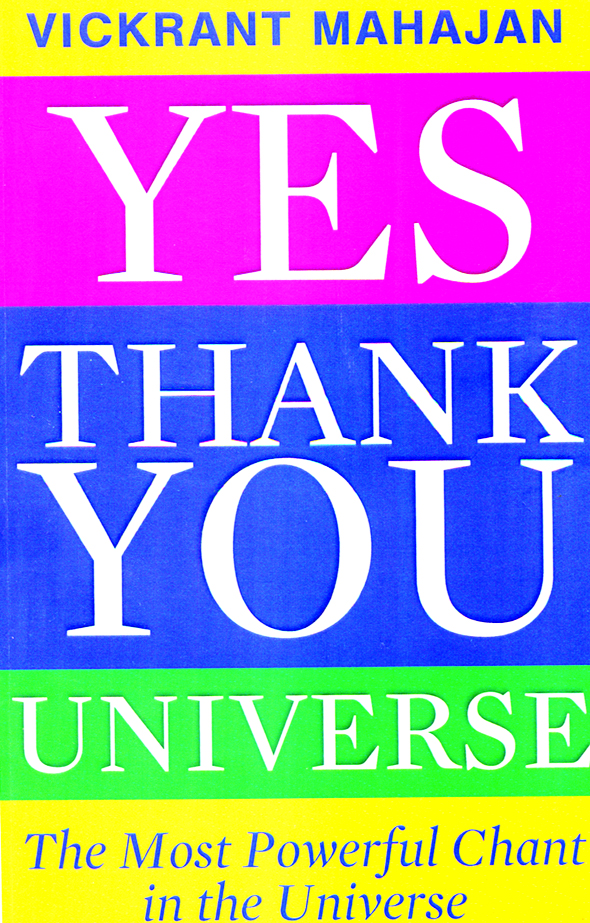 This popular book entitled ; “Yes Thank You Universe” have been authored by Vickrant Mahajan , the son of J&K soil.
His father S.K. Gupta encouraged him when his film “Chaloo Driver “ in 2012 was a flop which totally shatterd and put him to economic loss to the extent of nearly five crores, even his married life got ruined in Mumbai resulting his return to his homeland Jammu to be with his parents.
In a crucial turn of fate on September 19, 2013, he decided to started meditation for forty hours to findout the solution of his problem and inspire the world how to open the window of happiness . After four days of full concertation meditation results, he got four words that had magic power for his life, which according to him are : “Yes Thank You Universe” which inspire and brought total change in his life are : Love, Energy, Thanks, Praise, Attitude, Encourgement, Present, Smile , Unity and Independence which give positive attitude toward the life.
According to him everyone is in search of real happiness in his own life whether student, teacher, businessman etc.
On November 6, 2013, Vickrant Mahajan established Superpositivity Movement with the golden words : “Yes Thank You Universe” . The goal of this movement is to spread love and happiness in the world. Through this movement he wanted to share with friends, relatives and society the secret of happiness and the way to joy of life.
He holds that we should always praise each and everything in the world like seasons, birds, mothers , relations . He opines we should always say yes instead of no. The word yes always bring positivity and prosperity in life.
Benefits of Smile
Smile is very important aspect of life because it cures your illness, takes away from depressions. We get benefit from smile as we have 2,000 choclates. If we smile in critical conditions, the life will be change, the success always depends upon your smile and positive attitude.
He made ‘Challo Driver” Bollywood film. He was director, producer, hero and writer of the film. And he miserably failed and suferred heavy loss .In 2012. He was the first person in the history who lecture on the topic ‘Yes Thank You Universe”for (forty-eight) 48 hours on September 2014. He has written eight books . He spends most of his time in Superpositivty Movement with the message of love happiness and unity to the world , for the world and of the world.
We get light after darkness, we get happiness after struggle and so we should continue our mission for search of progress , prosperity , positivity and self-satisfaction.
(Starline Syndicate Service)