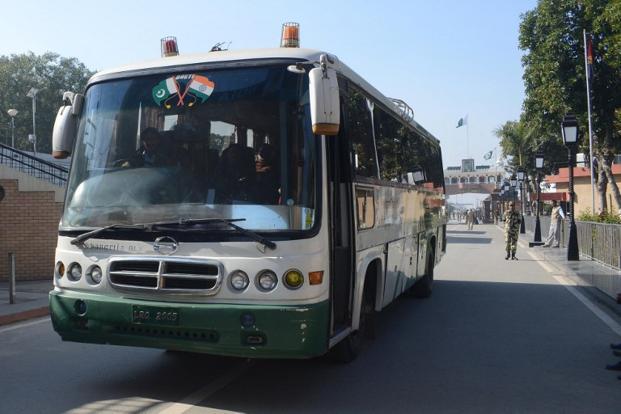 Excelsior Correspondent
JAMMU, Aug 26: A week after it was suspended, the Poonch-Rawalakot cross-LoC bus service resumed today, with 46 stranded passengers, including 40 from PoK, returning home, an official said.
The weekly service was suspended on August 19 after authorities in Pakistan-occupied Kashmir (PoK) did not respond to a call from their Indian counterparts to let a bus get across the Line of Control (LoC), according to officials.
“The bus service resumed with 40 PoK residents and six Indian citizens returning to their homes,” sources said
The permits of two other PoK residents, who had arrived in Poonch a week ahead of Eid-ul-Azha to meet their relatives, is yet to expire, he said, adding that there was no fresh traveller from either side.
The bus service, popularly known as ‘Paigam-e-Aman’, is on every Monday and it did not stop despite tension along the LoC in view of frequent ceasefire violations by Pakistan which has claimed the lives of three Army personnel and a civilian since August 17.
However, it was suspended last Monday, after officials said “we had sent a message to PoK authorities for bus service today (August 19), but they did not respond”.
Meanwhile, the Karvan-e-Aman bus, operating between Srinagar and Muzaffarabad, capital of Pakistan-occupied-Kashmir (PoK) and cross Line of Control (LoC) trade remained suspended since March 4 due to high tension between India and Pakistan, official sources said.
There is no possibility of resuming the peace bus to PoK introduced since April 7,2005 to help families divided in 1947 partition to meet each other, the sources said.
The weekly bus service was suspended on March 4 after it was reported that authorities from PoK side were repairing Aman Setu, peace bridge at Kaman Post, the last Indian military post on this side at Line of Control (LoC) in Uri sector. However, the service could not be restored due to tense situation on the border due to frequent violation of ceasefire by Pak troops on the LoC and International Border (IB) in the State.
The bus service, one of the major Confidence Building Measure (CBM) has helped thousands of families to meet each other after India and Pak agreed to allow only State subjects to travel in the bus on travel permits instead of International Passport. Barring hardline Hurriyat Conference (HC) chairman Syed Ali Shah Geelani and Democratic Freedom Party (DFP) chief Shabir Ahmad Shah, almost all separatist leaders had travelled in the bus to PoK and Pakistan. Shah is currently under the detention of Enforcement Directorate.