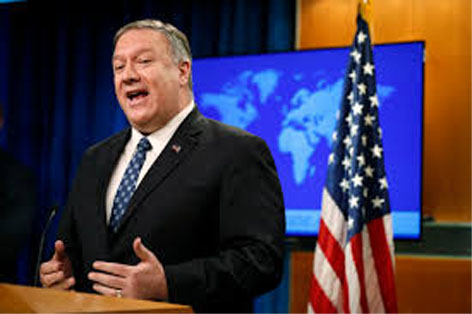 MOSCOW, Jan 15: US Secretary of State Mike Pompeo has held phone talks with Israeli Prime Minister Benjamin Netanyahu to discuss the recent development of the situation in the Middle East amid the rise of tensions in relations with Iran, the US Department of State said in a statement on Tuesday. “Secretary Pompeo and Prime Minister Netanyahu discussed recent regional developments related to Iran’s destabilizing actions. Secretary Pompeo reiterated that the U.S. commitment to Israel’s security is unwavering,” the statement attributable to State Department spokeswoman Morgan Ortagus read.
On January 5, Iran announced that it would abandon the remaining portion of commitments under the Joint Comprehensive Plan of Action (JCPOA), specifically on acceptable levels of uranium enrichment. The nuclear deal was signed in 2015 by Iran, China, France, Germany, Russia, the United Kingdom, the United States, and the European Union. In 2018, the US unilaterally withdrew and hit Iran with sanctions amid pleas from other signatories to preserve the deal.
In a joint statement on Tuesday, Germany, France and the UK said they were left with no choice but to trigger the JCPOA dispute resolution mechanism. Russia opposed to this scenario, while Canada has vowed to support international efforts aimed at getting Tehran back to implementing the accord. On a separate vector of escalation, Iran conducted airstrikes against US military facilities in Iraq in response to the assassination of its top military commander Qasem Soleimani last week. Hours upon it, the Iranian forces mistakenly hit a Ukrainian passenger jetliner with close to 180 people on board, having confused it with a US retaliatory missile.