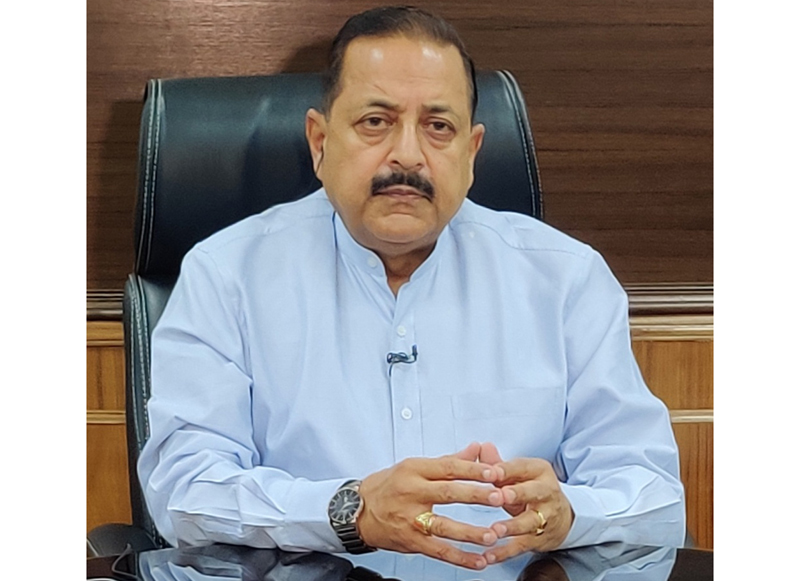 ‘Time has come for end of dynastic rule all over India’

JAMMU, July 31:Outrighly rejecting that new Domicile Law will make a demographic change in Union Territory of Jammu and Kashmir, Union Minister of State in PMO with Independent charge of North Eastern States, Dr Jitendra Singh today said that this is the myth created by those politicians of the erstwhile State who had vested interests.
In an exclusive interview to a national magazine on the eve of completion of one year of annulling of Article 370 and 35 (a), Dr Jitendra Singh said “It is not the population of demography they are worried about, it is vote bank demography which has perturbed them. They feel if some one comes from outside and gets citizenship after living here for 10 years, as per the Domicile Law or an IAS officer is allocated AGMUT cadre and after serving there for a couple of years, he will also get voting right and like that students, Pakistani refugees or Gorkha settlers get similar voting rights, that will impact their limited captive vote bank on which they have been thriving on. Otherwise, if there is a healthy change of demography happening all over the world, why should J&K shy away of it?”, he asked.
Dr Jitendra Singh, while defending the Domicile law said there are certain advantages to it. Now people are increasingly realising this façade of demography and debate is cooling down.
Maintaining that the time has come for the end of dynastic rule not only in J&K but in entire country, Dr Jitendra Singh in reply to another question said that not only in J&K but in entire India the feudalist hangover is over now.
“It is the third generation after the independence and it is said that even the Samaskara changes after third generation. Today, people have learnt to test and elect their representatives based on certain evidence. So, I don’t think simply being the member of a dynasty would be sufficient to reach where you wish to reach.”
On entry of new political parties in J&K, he said BJP is not averse to it. He said it is good if more parties come in J&K to contest the elections and strengthen democracy because, entry of more political parties is in the best interests of democracy,.
Dr Singh on holding of Assembly elections in J&K said that they will be held in due course of time saying that the delimitation exercise is also going on in the UT. He, however, parried the question that will Government wait for the delimitation exercise to get completed before holding Assembly poll in J&K.
On restoration of statehood to J&K, he said that Home Minister Amit Shah has said on the floor of the House that UT is an arrangement for the time being and once the circumstances are congenial, J&K will be reverted as the State.
Denying that BJP is doing delimitation for vote bank gains, Dr Jitendra Singh said that his party is not barring anybody form their voting rights so this allegation has no base.“If this allegation is coming from some quarters, may be they are apprehensive that after delimitation they will not be able to thrive on that captive vote bank. If they are truly committed to democracy, they should be ready for delimitation and a free franchise. BJP has never shied away from it”, he added .
He said BJP has been supporting voting rights all over the country. The party has never obstructed any procedures and processes but in the natural course, if people of J&K, elect BJP then it is not BJP’s manipulation, then there is something wrong on the other side, he added.
Dr Singh also made it clear that the special status of the J&K has not benefitted any one except the dynastic parties of Kashmir. He said the National Conference (NC) or the People’s Democratic Party (PDP) have used the alibi of Article 370 for their convenience.
The so called protagonists of Article 370 were also not loyal or the faithful to it. They used it to carry on their political hegemony. They deprived their daughters of the right to property and citizenship. There are three ex chief ministers whose daughters were deprived of citizenship rights or property rights just because they had married outside J&K. So this was an anomaly, a miscarriage of history and against the principle of Justice. Any anomaly can’t stay forever, that is the rule of nature, he added.
To a question that China and Nepal have reacted sharply to India’s claim on PoJK, Aksai Chin, Kalapani after the abrogation of Article 370, Dr Jitendra Singh said that it has nothing to do with the abrogation of Article 370. Terming it a sensitive matter related to security, he said he would not go into nuances and the matter will be best dealt by the Ministries of External Affairs and Defence. “We have to stand by the stand of External Affairs and Defence Ministries over the issue”, he added.
He said J&K has been immensely benefited with the annulling of so called special status as 800 Central laws which were not applicable to the erstwhile State and were held back due to political reasons have become applicable to the UT after August 5 and 6 last year.
He took a dig at political parties like NC and PDP who talked of autonomy and they meant autonomy and self rule for their families and not for the democratic institutions like local bodies and Panchayats.