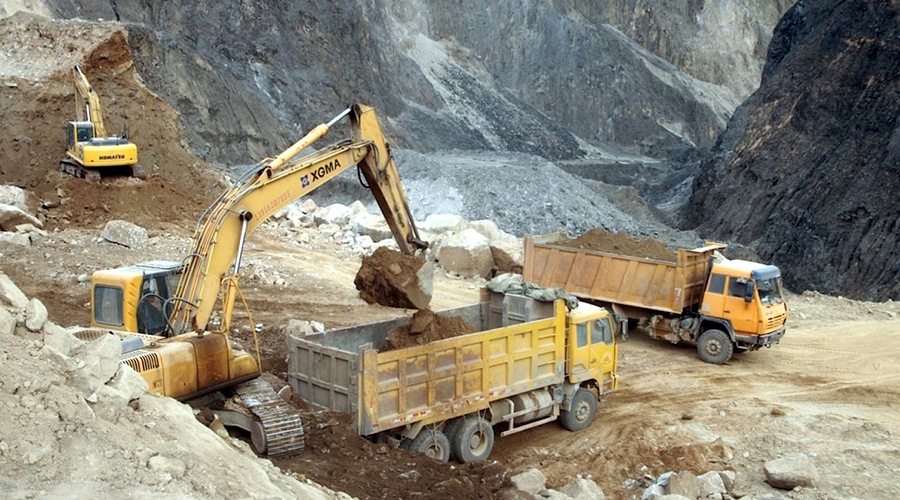 Complaints of intimidation, misuse of weapons in illegal mining
Locations identified for setting up of hi-tech check posts

Mohinder Verma
JAMMU, Sept 10: Though Geology and Mining Department is sleeping over the findings of joint team of different departments yet Kathua administration has initiated a number of steps at its own level to curb the menace of illegal mining in the district particularly in Ravi River. Even matter has been taken up with the Deputy Commissioner of Pathankot district for necessary action at his end as the mafia has strong network in the adjoining State of Punjab.
Official sources told EXCELSIOR that Kathua administration has received a number of complaints regarding intimidation by the elements indulging in illegal mining in different parts of the district and the potential to misuse arms licenses issued to them in carrying out their illegal activities.
Accordingly, the administration has directed the District Police authorities to conduct verification of gun licenses issued in the name of crusher unit owners and affiliated persons so that no untoward incident takes place.
“The District Police and Special Branch Kathua have been asked by the district administration to complete the verification of gun licenses as expeditiously as possible and submit the status report in this regard so that cancellation/ suspension of such arms licenses can be considered under the provisions of the Arms Act, 1959 and the Arms Rules 2016”, sources informed.
Moreover, the administration has set into motion an exercise for establishment of joint mineral check posts at strategic locations in the district which are being used as entry and exit points by trucks, loaders and trolleys carrying out illegal mining activity, sources said while disclosing that recce of all such locations has been conducted by the Deputy Commissioner Kathua Dr Raghav Langar along with various line departments—Revenue, Police, R&B, Forest, Irrigation and Flood Control and Geology and Mining.
“During the field survey sites have been identified wherein joint mineral check posts manned by police and District Mineral Office staff will be established to regulate the movement of vehicles engaged in the mining”, sources said, adding SIDCO has been asked to put up the estimates and immediately start the work for setting up of the joint posts at all these identified locations.
A total of 10 locations which include main road and link roads between Keerian Gandiyal area and adjoining villages of Punjab, downstream of Pandori bridge, Bedian Pattan, main highway and link road between districts of Kathua, Samba and Jammu—Jangi Chak, Kootah, one location at Billawar and Basohli each, have been identified where these joint check posts will be established.
Stating that setting up of joint check posts at these locations will go a long way in curbing the illegal movement of vehicles to a large extent, sources disclosed that each joint check post will have drop barriers, rolling barriers and tyre deflators. Moreover, each of these check posts will have IP cameras with live view in Deputy Commissioner office, SSP office and District Mineral Officer’s office.
Two locations wherein the JCB machines, trucks and loaders come to J&K side through Ravi River and go back towards Punjab side after doing illegal mining have also been identified. Moreover, Deputy Commissioner Kathua has written to the Deputy Commissioner of Pathankot district to establish mineral check posts in his area-opposite Bedian Pattan and Madhopur exit point near NH bridge. “The coordinates and photographs of these locations have also been shared with the Pathankot administration”, sources informed.
Pointing towards illegal stacking of crushed material found during the surprise inspections of various crusher units last month, the administration has sought monthly sale purchase details from the crusher unit owners of the last three years. Moreover, for future, all crusher unit owners have been directed to submit the monthly sale purchase details to the office of District Mineral Officer by 7th of every month for the preceding month.
Meanwhile, continuing its action against the crusher unit owners engaged in illegal mining, the administration has imposed fine of Rs 2.59 crore on the owner of M/s Jai Rajputana Screener, Taraf Tajwal on account of violation of J&K Minor Minerals Concession Storage, Transportation of Minerals and Prevention of Illegal Mining Rules.
“Similar assessment is being done for two other crusher units situated at Taraf Tajwal-M/s New Jai Rajputana Stone Crusher and M/s OM Sai Screener”, sources said.
It is pertinent to mention here that joint team of different departments has mentioned in the report that only two mining leases have been allotted by the Geology and Mining Department in the area-one at Keerian Gandiyal, downstream of the bridge (19.94 hectare area) and another at Jagatpur, upstream of the bridge (also of 19.94 hectare area). The total permissible excavation on the allotted mining lease at village Keerian Gandiyal is 11 lakh Metric Tonne per annum and at village Jagatpur the same is 9 lakh Metric Tonne per annum.
However, during ground verification 233.73 lakh Metric Tonne of minor minerals were found extracted from this small segment of Ravi River basin. Moreover, at many places in Keerian Gandiyal area 14 meters to 16 meters deep excavations have been made in blatant violation of the rules.
“It is a matter of serious concern that the Geology and Mining Department has not initiated any serious step to check illegal mining even on the receipt of findings of the joint team of different departments”, sources said.