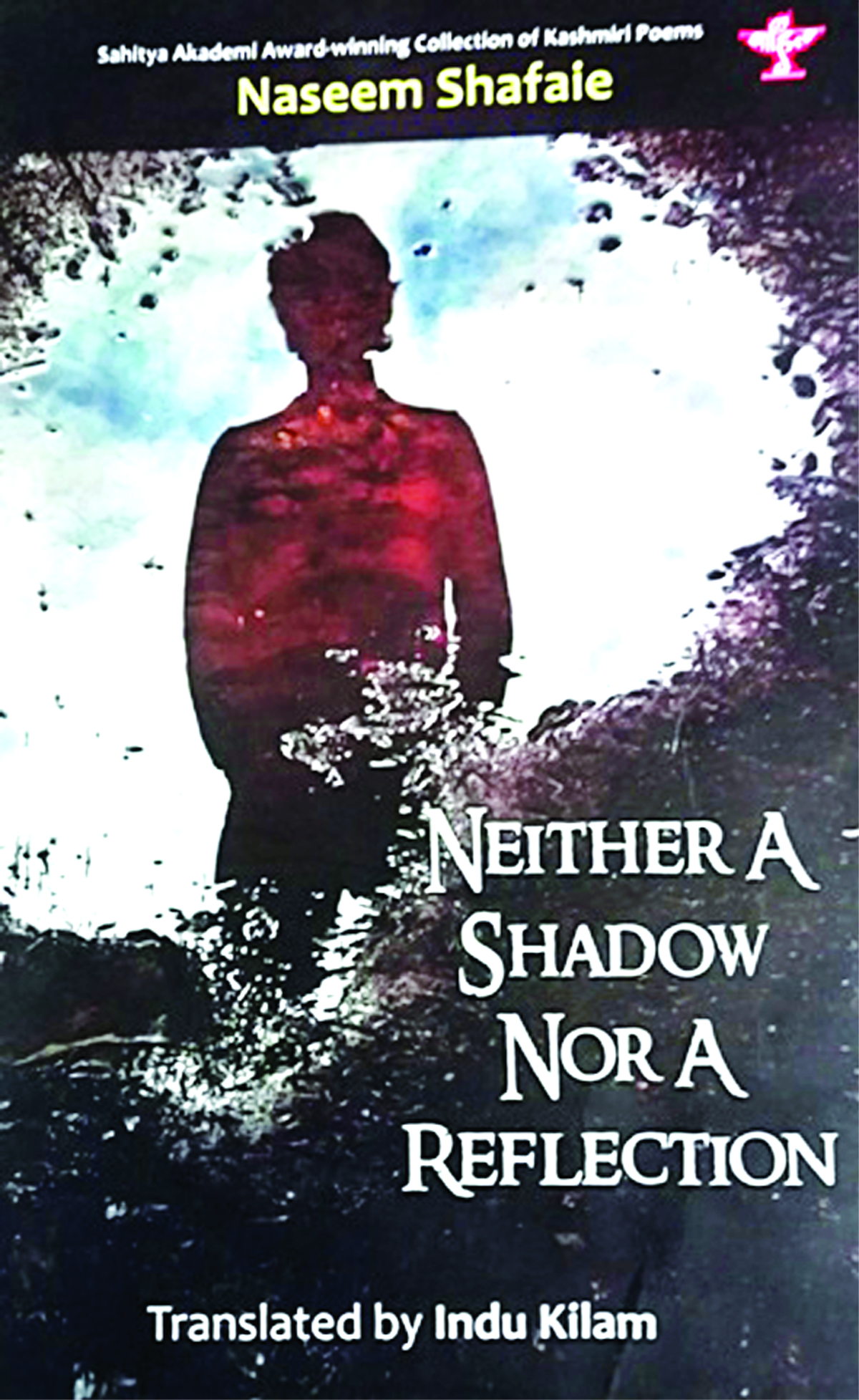 Adarsh Ajit
Lastly I dragged in the corpse of the relationship/ and cried in grief/ I sat by the corpse/and from my inmost /buried it deep in the vault of my heart.
Indua Kilam has remained extra careful in translating the Sahitya Akademy winning book of Naseem Shafaie na tshay na aks. In this endeavour, Indu has missed to add her own creativity. The translation of some of the poems is excellent but some poems need relook in poetic arrangement, display and layout of the sentences.
Naseem is the poet of love and relationship. Her poetry is full of pain of separation, deception, relational break ups and failed connectivity. Nevertheless, she is not tired of the waiting. She talks with the aroma of flowers, with the air and with other messengers of nature. Despite Shafaie being a Kashmiri, having elements of scenic beauty at her back, yet most of her poems are directly human-centric and genuinely so. A few poems are mix-up of nonliving and living:
I like Lalla/rose in the late hours of the night/and lulled you in my lap and woke you up/ I like Habba Khatoon/said you are the sky/ I am your earth/ you the shelter of my secrets.
Shafaie’s concept of love fits both in universal as well as personal mould. She wishes her beloved to come, stay a while and realise his faults so that she would believe that he has come for her. Her beloved is annoyed. He feels she has not been able to reciprocate his love. But she opines that her beloved is mistaken in his belief that he is the only human around. Sometimes she is threatening her beloved for his follies:
Why can’t you even now/dare to look into my eye?
Naseem is thirsty from ages. She wants to drink her tears sip by sip so that her breathing becomes easy and she falls a joyful sleep. Her style of loving is a strange blend of complaining, and hoping to meet. Sometimes she behaves like an ocean and devours all the tragedies of love. Her approach of love is vacillating. She wants her love to be talked about by everybody. She also tries to hide her love a few times and is thus inexpressible:
Lovingly he will come and listen to me/ I hope that moment never comes/ he does not know/he should not know/that he is my love
Naseem has dealt her poetry with extreme sensitivity on all the levels. She alleges that people cutting a cypress tree blame the tree itself for its destruction. The cypress tree may also refer to the valley of turbulence. The nests are dismantled. Sometimes she finds a city to her taste and sometimes feels city a soundless place without any hustle and bustle. However, in both the cases, she feels people cold and free from human instincts. She is so misfit in the world of chaos and confusion that she says:
They say the cypress tree itself was cut/destroyed and chained…why did you allow her space to build her nest/why did you allow her to sing?/ this is a soundless city/this is a soundless city.
‘Across the river of the mind/near the bank of thought/in the city of dreams’, ‘That day the weather was childlike’, ‘Having drunk of this cup of poison / she was born anew’, ‘She wore the garments of love/and set on fire her wings’, and ‘If you don’t open the widow now I will die here/ There is a spell on this room/commit no mistakes’ are the few couplets which show both the creative acumen of the poet and the fidelity of the translator.
Complaining against the male dominancy Naseem questions even Shiva about the sacrifices of Shakti. She has touched the existential difficulties which woman folk are subjected to by the male dominant society from their birth until the last breath. She terms the marriage based on give and take merely a commercial transaction:
What had she got for them when she came with such pride/ would she stand this commercial transaction or would she die or/ continue staying in the house
Naseem also projects the woman in various capacities. She also keeps the present trend in mind when the progeny is opting for far-off places for their jobs and settlement. They also forget the old fondling love and the parents’ wait for their last sip of water. Under these circumstances, the mother is full of anguish. However, at the same time, her bag of blessings does not lessen:
Lest not my coffin lie/ waiting for your shoulder/…I console my heart saying…/Even if far away/you would surely spare/ a look at me
Naseem’s outflow of love-hate-relationship is spontaneous. She is physically separated but mentally connected. At times, she is physically with her close one but separated by heart:
Such a wide between us that we don’t meet/even when we are together/ Not close, even we are sleeping side by side.
Admonition is a multidimensional poem where the poet loses the identity and home. She is nowhere. She dies with every tick of the clock. She requests not to send letters as she is without address:
Don’t send a letter to me/Don’t send…Dying every second with water/ The stone I was tied to/ is also drowned in the deluge//I have no address/don’t send me a letter.
Naseem’s ghazals run at par with the level of her nazams. She and her beloved are blamed for unspoken words. She knows if a word will slip from the tongue, it will reach the common people with spices of their taste. Despite knowing that nobody would come she still leaves the doors open. Even if she does feel none would come, yet her unknown cry reveals her inner aspirations:
Neither was a knock at the door/nor had someone come/I gathered a basket of flowers/Why did I cry?