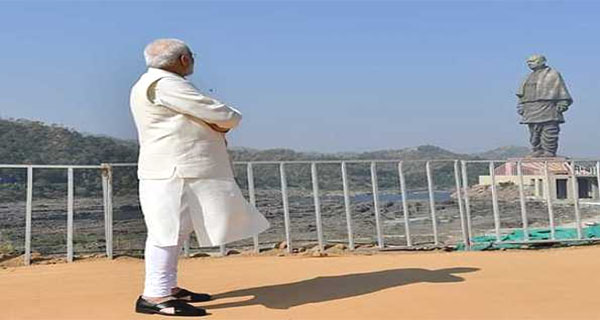 NEW DELHI, Oct 30:
Prime Minister Narendra Modi will pay tributes to Iron Man of India Sardar Vallabhbhai Patel at the Statue of Unity, Kevadiya in Gujarat on the occasion of Sardar’s birth anniversary, on October 31.
Prime Minister Modi will also participate at the Ekta Diwas Parade, visit the Technology Demonstration Site and later interact with Civil Service Probationers at Kevadiya, according to a Prime Minister’s Office statement here on Wednesday.
Since 2014, October 31 is observed as National Unity Day and people from all walks of life participate in the “Run For Unity’. In his Mann Ki Baat Programme on October 27, the Prime Minister urged people to participate in large numbers in the ‘Run For Unity’ towards One Goal ? “Ek Bharat Shreshth Bharat”.
“October 31 every year since 2014 has been celebrated as ‘National Unity Day’. This day imparts the message to protect the unity, integrity and security of our country at any cost,” he has said.
On October 31, this year too ‘Run for Unity’ is being organised like the previous years, Mr Modi said, adding that “Run for Unity is a symbol of unison, that the nation being united, is moving in one direction and collectively aims for- One goal! Ek Bharat, Shreshth Bharat !” (UNI)