E-Paper
Home Latest News PM to embark on a day-long election campaign in UP, Uttarakhand and... 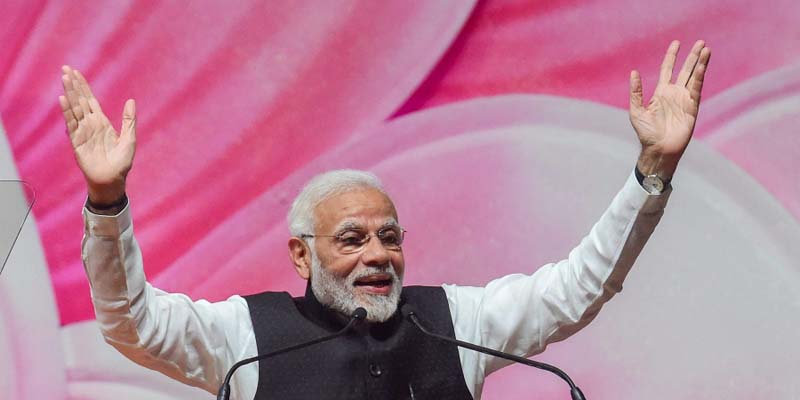 NEW DELHI:  Basking on the glories of Mission Shakti that has made India a global space power, Prime Minister Narendra Modi will embark on a marathon day-long campaign trail on Thursday in three states of Uttar Pradesh, Uttarakhand and Jammu and Kashmir.
According to party sources, Prime Minister, who is set to address at least 20 rallies in UP, will cover cover at least eight Lok Sabha constituencies in the Meerut rally.
Between Bihar and UP, out of 120 seats – in 2014 the NDA’s share of seats was 104 and that had sealed the certain victory in BJP’s favour.
The other two rallies will be one each at Rudrapur in Uttarakhand and in Jammu.
The voting for Jammu will be held in the second phase on April 18 while elections to the Udhampur seat is scheduled on April 11.
The Meerut rally has a special significance as the Samajwadi Party and BSP alliance is expected to provide a formidable challenge to the BJP this year despite the saffron party having done well in the region in 2014 Lok Sabha polls and 2017 assembly elections.
BJP candidates for both the seats Jugal Kishore Sharma from Jammu and Jitendra Singh from Udhampur have been renominated by the party.
The party has also announced BJP chief Amit Shah’s rallies on Thursday at Kaliabor and Jorhat in Assam.
Both the seats go to the polls on April 11. As part of alliance between BJP and AGP, the Kaliabor seat has been spared for AGP.
Spread across Golaghat, Jorhat, Morigaon and Nagaon districts, Kaliabor parliamentary constituency covers ten assembly segments and is expected to witness an interesting contest.
In 2014, Gaurav Gogoi won the seat by convincing margin defeating the BJP candidate.
This year, the AGP-BJP alliance candidate and younger brother of State cabinet minister Keshab Mahanta, Moni Madhab Mahanta will take on Gaurav Gogoi.
From Jorhat, the BJP’s nominee is state Power Minister Tapan Kumar Gogoi and he replaced the sitting member Kamakhya Prasad Tasa.
Assam has 14 Lok Sabha seats and in 2014, the saffron party had won seven.
(AGENCIES)