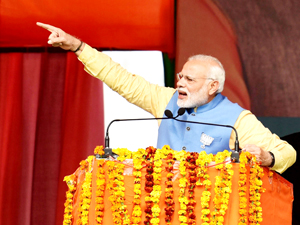 BHOPAL, Sep 25:
Prime Minister Narendra Modi today took a dig at the Congress over National Conference’s decision to boycott the upcoming Civic and Panchayat polls in Jammu and Kashmir.
The National Conference has said it is boycotting the elections to Panchayat and Urban Local Bodies in the State because the Centre has not clarified its position on Article 35-A of the Constitution, which is facing legal challenge in the Supreme Court.
“There are elections (to Civic Bodies) in Jammu and Kashmir and the allies of Congress are running away from the polls,” Modi said while addressing a rally of BJP workers in Bhopal.
The Prime Minister did not name the National Conference but the reference was obvious.
“If the Congress had a bond with them, it should have stood with them. But they (the Congress) in J&K are saying that well, if you do not want to come along, we can go solo in Panchayat elections,” he said and asked “What type of coalition is this?”
Article 35A of the Constitution bars non-residents of Jammu and Kashmir from acquiring any immovable property in the state.
The Supreme Court had on August 31 deferred the hearing on a bunch of petitions challenging Article 35A of the Constitution, as the Centre had urged the court to take up the matter after Panchayat elections in the State. (PTI)