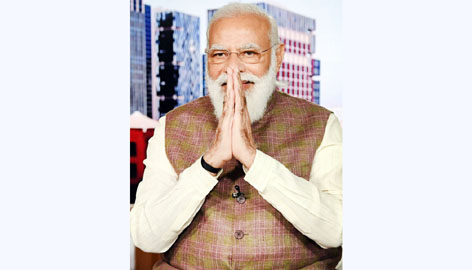 Nishikant Khajuria
JAMMU, Nov 20: In the wake of killing of four terrorists at Nagrota yesterday and recent spurt in cross-border firing by Pakistan to push infiltrators, Prime Minister Narendra Modi today held a review meeting with top security brass and took stock of the situation in Jammu and Kashmir.
Click here to watch video
Union Home Minister Amit Shah, National Security Advisor (NSA) Ajit Doval, Foreign Secretary Harsh Vardhan Shringla and top intelligence officers were present in the review meeting.
Sources said that a detailed presentation was given to the Prime Minister about latest security situation in Jammu and Kashmir in the wake of the killing of four Jaish-e-Mohammed terrorists at Ban Toll Plaza in Nagrota by the security forces that foiled the efforts by Pakistan sponsored terror outfits to wreak major havoc and destruction in Jammu and Kashmir during the scheduled District Development Council polls.
The meeting also discussed in detail the recent spurt in heavy firing by Pakistan troops along International Border and the Line of Control for facilitating infiltration of terrorists in Jammu and Kashmir.
The Prime Minister was also apprised about preparedness of the security forces to foil nefarious designs of the Pakistan sponsored terrorists, who are purportedly planning major strikes to disturb peace in Jammu and Kashmir, particularly in the wake of District Development Council polls, which are being held across the Union Territory in the different phases, commencing from November 28.
Such a major attempt was foiled yesterday when alert security forces eliminated four Jaish-e-Mohammed terrorists, believed to be Pakistanis, in a pre-dawn encounter at Ban Toll Plaza in Nagrota area of Jammu-Srinagar National Highway. The slain terrorists were hiding in a truck on way to Kashmir and had been carrying 11 AK rifles along with three pistols, 28 live grenades, six UBGL grenades, 7.5 grams RDX, three wireless sets, 24 AK magazines, three pistol magazines, one bundle of liquid explosive, five battery remotes, one RDX remover timer, etc. According to Police, these terrorists were planning “something big” to disturb DDC polls and on the anniversary of the 26/11 Mumbai terror attack.
In the review meeting, the senior officers of the security agencies also apprised the PM about the situation along the International Border and Line of Control where increasing incidents of unprovoked ceasefire violations by Pakistan troops are being witnessed in the past some time, primarily to push terrorists into Jammu and Kashmir.
As the PM was also apprised of preparedness of the security forces to effectively deal with the enemy forces, sources said that the top officers informed and explained how several Pakistani posts were recently destroyed during pinpoint strikes in retaliation to unprovoked firing from across the border.
After taking detailed feedback about the latest situation, sources said that PM Modi issued directions to further intensify the security grid in Jammu Kashmir and along border with Pakistan for thwarting nefarious designs of enemy forces. He also hailed security forces for their bravery and foiling nefarious designs of enemies of peace.
In his tweets following the meeting, Modi said, “Neutralising of 4 terrorists belonging to Pakistan-based terrorist organisation Jaish-e-Mohammed and the presence of large cache of weapons and explosives with them indicate that their efforts to wreak major havoc and destruction have once again been thwarted.”
Hailing the security forces, he said they have once again displayed utmost bravery and professionalism.
“Thanks to their alertness, they have defeated a nefarious plot to target grassroots level democratic exercises in Jammu and Kashmir,” the Prime Minister added.
Meanwhile, Prime Minister Narendra Modi also held a meeting to review India’s vaccination strategy in which issues like prioritisation of population groups and tech platform for rolling out vaccine for the coronavirus were discussed.
Modi tweeted that the meeting discussed important issues related to the progress of vaccine development, regulatory approvals and procurement.
“Reviewed various issues like prioritisation of population groups, reaching out to HCWs (health care workers), cold-chain Infrastructure augmentation, adding vaccinators and tech platform for vaccine roll-out,” he said.