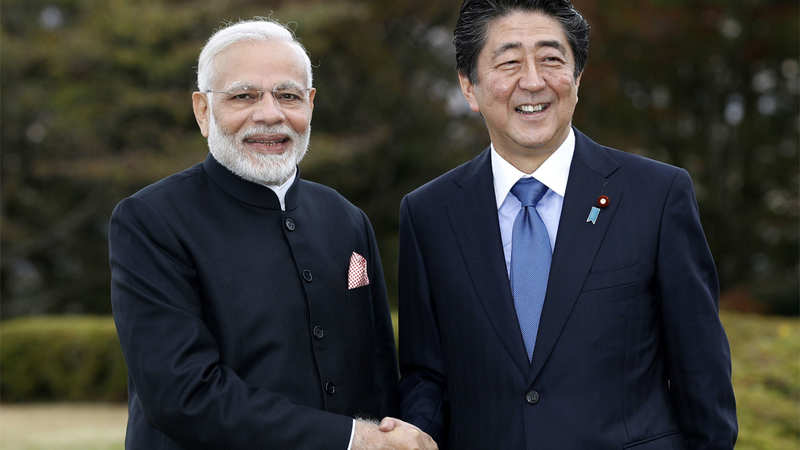 VLADIVOSTOK, Sept 5: India and Japan agreed to further deepen cooperation in the strategic Indo-Pacific region where China has been flexing its military muscles, as Prime Minister Narendra Modi held in-depth talks with his Japanese counterpart Shinzo Abe here on Thursday.

The two leaders in their second meeting after the G20 Summit in Osaka in June, pledged to deepen collaboration in a number of areas, including in trade, cultural and defence sectors.

Modi, who arrived in Russia on a two-day visit, is the first Indian prime minister to visit to the Russian Far East Region.

“Delighted to meet PM Shinzo Abe in Vladivostok. We had in-depth discussions on a wide range of subjects, particularly bettering trade and cultural relations between our nations. Our countries are also working together on various global forums to create a better planet,” Modi said in tweet.

The meeting between prime minister Modi and Abe comes after they met at the G-20 Summit in Osaka in Japan and on the sidelines of the G7 Summit in Biarritz in France.

Briefing the media about the Prime Minister’s meeting, Foreign Secretary Vijay Gokhale said the two leaders had a discussion on the Indo-Pacific region, an issue on which India and Japan share similar views.

“Prime Minister Abe spoke of a free and open Indo-Pacific and the importance of a bilateral cooperation in that regard, both on economic side and in terms of people-to-people relations to build a secure and prosperous Indo-Pacific region,” he said.

India, the US and several other world powers have been talking about the need to ensure a free, open and thriving Indo-Pacific in the backdrop of China’s rising military maneuvering in the region.

In November last, India, the US, Australia and Japan had given shape to the long-pending Quadrilateral coalition to develop a new strategy to keep the critical sea routes in the Indo-Pacific free of Chinese influence.

China claims sovereignty over all of the South China Sea.

Vietnam, Malaysia, the Philippines, Brunei and Taiwan have counter claims.

China is engaged in hotly contested territorial disputes in the East China Sea too with Japan. Beijing has built up and militarised many of the islands and reefs it controls in the region.

Both areas are stated to be rich in minerals, oil and other natural resources. They are also vital to global trade.

“Abe also mentioned the recent visit of Defence Minister Rajnath Singh. He said during the visit substantial issues had been discussed in carrying forward our exchanges and cooperation in the defence sector,” Gokhale said.

Modi and Abe also had discussed regional and international affairs.

Both leaders gave a “very positive assessment” of the Japan, America, India trilateral meeting, Gokhale said, adding that they agreed that this tradition of having a summit meeting between the three countries should continue.

“A lot of discussion was on bilateral relationship with particular emphasis on the forthcoming visit of Japanese Prime Minister to India for the Annual Summit that would take place sometime in December. Dates will be negotiated and announced in due course,” he said.

“Modi and Abe also discussed Africa. Abe said during his visit to India, the two leaders will further discuss this issue,” he added.

Modi arrived in Russia on Wednesday to participate in the 20th India-Russia annual summit with President Vladimir Putin and the fifth meeting of the Eastern Economic Forum (EEF).

The forum focuses on development of business and investment opportunities in the Russian Far East Region, and presents enormous potential for developing close and mutually beneficial cooperation between India and Russia in the region. (PTI)