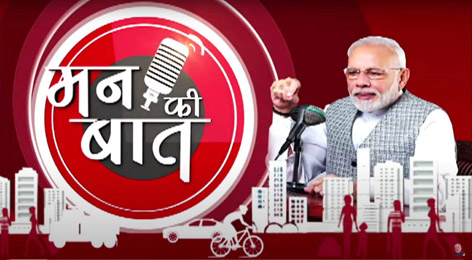 Students made over 7700 flags on I-Day; over 3 lakh masks

Srinagar, Oct 24: Prime Minister Narendra Modi today made a mention of the National Flag manufacturing initiative which is being carried out in North Kashmir’s Kupwara district and said that such attempts are satisfying and talks of the sentiment of patriotism.
Click here to watch video
Speaking during the 82nd Episode of ‘Mann Ki Baat,’ the PM said “it is our duty that we must associate ourselves with some activity that conveys the message of national unity”. While stating that, he made a mention of the manufacturing of national flags by the youngsters in Kupwara.
“I have also come to know of many sisters from the Kupwara district of Jammu-Kashmir itself. In Kashmir, these sisters are working to make the Tricolour for the Army and Government offices,” he said.
He added that the people need to do one thing or the other aiming at the unity of India and that whenever such activities are carried out, one’s heart is filled with a sense of satisfaction.
“This work is brimming with the sentiment of patriotism. I appreciate the spirit of these sisters. You too must do something for the unity of India, for the greatness of India. You will see how satisfying this is,” the PM said while referring to the initiative carried out in Kupwara.
Talking to Excelsior, Muhammad Iqbal, Director Jan Shikshan Sansthan (JSS), Ministry of Skill Development Kupwara under whose supervision the initiative was carried out, said that the PM mentioning the initiative is quite encouraging and that more such projects need to be started all across J&K for the betterment of the specially-abled people engaged in the project as well others who are actively taking part in the project and the making of national flags.
He informed that the initiative of flag making was started in the current year and on the occasion of Independence Day, more than 7700 flags were made which were then distributed on the occasion across the districts in north Kashmir.
He said that in the process of flag making, around 240 youngsters were involved while several such centres have been set up across Kupwara where these youngsters are working.
“1800 girls are being trained for different skills and it is to be mentioned that during the COVID, these youngsters also made over 3 lakh masks that were then distributed for use by the general public.
While referring to the mention of the initiative made by PM Modi, he said that the mention by the PM is going to encourage those who are associated with the initiative. “The specially-abled need to be encouraged more and more JSS projects need to be started across Kashmir,” he said.
The PM also said that “we must associate ourselves with such activities which convey the message of national unity.”
“We must associate ourselves with some activity that conveys the message of national unity. You must have noticed that recently Gujarat Police took out a bike rally from the Lakhpat Fort in Kutch to the Statue of Unity. To celebrate Unity Day the personnel of Tripura Police are organising a Bike Rally from Tripura to the Statue of Unity…,” he said.
The PM also mentioned the personnel of Jammu- Kashmir Police and said that they too are giving this message of unity of the country “by taking out a similar Bike Rally from Uri to Pathankot. I salute all these jawans.”