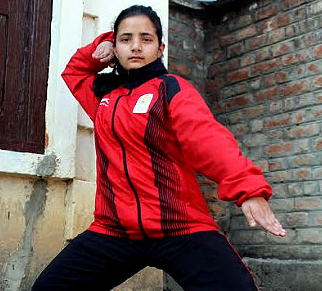 ‘India’s self defence mechanism reinforced’
Excelsior Correspondent
JAMMU, Dec 30: Prime Minister Narendra Modi today lauded courage and hard work of Kashmir’s daughter, Hanaya Nissar, who recently won gold medal in martial arts in South Korea.
“Hanaya Nissar, just 12 years old, who hails from Anantnag district of Kashmir has won gold medal in martial arts championship in South Korea with her hard work, determination and courage,” Modi said in his monthly `Mann Ki Baat’ Radio Address this morning.
Modi said Hanaya Sharief understood the game with her grit and talent and proved her mettle at the international level by winning the gold medal in South Korea
“On behalf of the countrymen, I pray for her (Hanaya Nissar’s) bright career,” the Prime Minister said.
Click here to watch video
It may be mentioned here that Hanaya Nissar had won gold medal in 3rd world Sqay Martial Arts event at South Korea and brought laurels to the State and the country.
“The country’s self defence mechanism got further reinforced. It was during this very year that our country has successfully accomplished the Nuclear Triad, which means we are now armed with nuclear capabilities in water, on land and in the sky,” Modi said.
He was referring to the first combat patrol carried out by nuclear submarine INS Arihant recently.
Spreading negativity is fairly easy, but people must come together to make positivity viral, Modi said, adding that collective efforts of the people have ensured that India achieved a lot in 2018.
He also said if the resolve is strong, hardships fail to turn into obstacles.
“I sincerely hope that India’s journey on the path of advancement & progress continues through 2019 too, taking her to newer heights with her inner strengths.
“…Let’s come together to make positivity viral. I do believe that by doing so, more and more people will get to know about our heroes who brought a change in society. Spreading negativity is fairly easy. But some really good work is being done around us…,” Modi said.
He said several websites are spreading positive news and people should share their links so that positivity can be made viral.
He noted that the year 2018 saw the launching of the world’s biggest health insurance scheme ‘Ayushman Bharat’.
“Electricity reached each and every village of the country this year. Noted world institutions have accepted that the country has taken strides in the area of poverty alleviation at a record pace. On account of the unwavering resolve of our countrymen, swachchata, the sanitation coverage, is rapidly advancing towards crossing the 95 per cent mark,” the Prime Minister said.
For the first time ever after Independence, the Tricolor was hoisted at Red Fort besides the independence day celebrations. This was done to mark the 75th anniversary of the formation of the Azad Hind Government, he recalled.
To honour Sardar Vallabhbhai Patel, world’s tallest statue, the Statue of Liberty, was unveiled, he said, adding that recently he had also announced ‘Sardar Patel Award’ for National Integration to be given to those who have contributed for national unity in any form.
The highest United Nations Environment award, ‘Champions of the Earth’ was also conferred upon India, Modi said in his address.
“The world duly took notice of India’s efforts in the areas of solar energy and climate change … It is due to our collective efforts that our country has seen unprecedented improvement in the ‘ease of doing business’ rankings.
He also referred to achievements made by sportsmen at various international events, including para Asian Games, Commonwealth Games and Youth Olympics.
Modi also paid obituaries to people with modest backgrounds who made their mark in social service and had passed away in 2018.
“If your resolve is strong, if your fervour, your enthusiasm is without bounds, all your hurdles halt in their tracks. Hardships can never turn into obstacles,” he said.