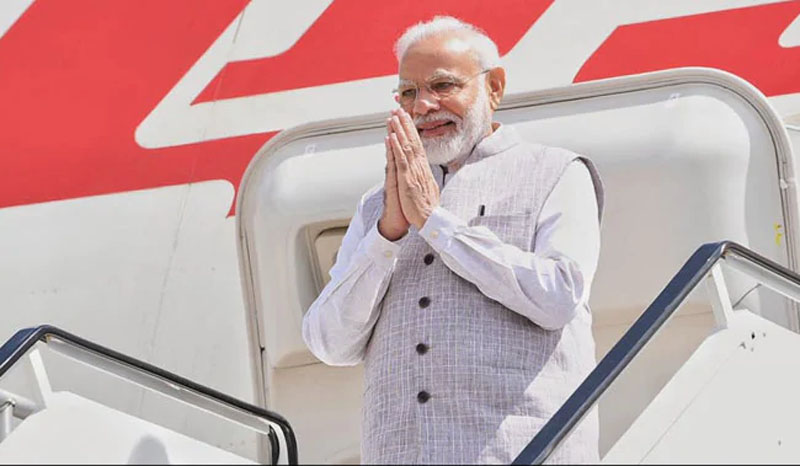 HOUSTON, Sept 21:
Prime Minister Narendra Modi was accorded a warm welcome by members of the Indian community here today as he arrived at the George Bush International airport for the mega “Howdy Modi” event in which he will be joined by US President Donald Trump and address over 50,000 Indian-Americans.
The “Howdy Modi” event on Sunday at the sprawling NRG Football Stadium here is the largest gathering ever for an elected foreign leader visiting the US, other than the Pope.
US President Trump’s presence at the Houston event marks a new milestone, Modi had said in his departure statement ahead of his visit.
This would be the first time a US President is attending an Indian-American community event with Modi.
Welcoming Trump “special gesture”, the prime minister had said that it signifies the special friendship between India and USA and highlights the strength of the relationship and recognition of the contribution of the Indian community to American society and economy.
In Houston, Modi will also interact with CEOs of leading American energy companies with an aim to enhance India-US energy partnership.
From Houston, Modi will fly to New York where he will address the annual high-level UN General Assembly session in New York on September 27 and will have a packed agenda of bilateral and multilateral engagements.
Modi will meet Trump in New York on Tuesday, the fourth meeting between the two leaders in as many months. The meeting in New York is expected to set the tone of bilateral relationship between the two countries over the next few years.
The two leaders are likely to discuss a range of bilateral, regional and global issues, including efforts to address the growing bilateral trade disputes, potential defence and energy deals and peace process in Afghanistan.
In his departure statement, Modi referred to the Indo-US relations and said working together, the two nations can contribute to building a more peaceful, stable, secure, sustainable and prosperous world.
Modi also said that at the High Level Segment of the 74th Session of the United Nations General Assembly, he would reiterate New Delhi’s commitment to reformed multilateralism, which is responsive, effective and inclusive, and in which India plays her due role.
Foreign Secretary Vijay Gokhale in New Delhi on Thursday had said the focus of Prime Minister Modi’s week-long visit to the US to attend the UNGA will not be on terrorism, but on highlighting India’s achievements and its global role.
He also asserted that abrogation of provisions of Article 370 from Jammu and Kashmir was an internal issue and off the agenda at the UN. (PTI)