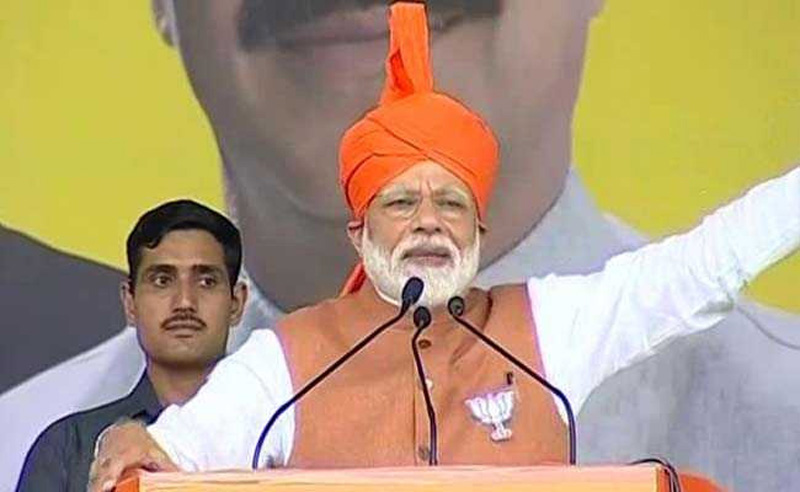 Prime Minister Narendra Modi today again began his speech in Dogri, like February 3 rally at Vijaypur, saying he was blessed to have paid obeisance to Goddess Vaishno Devi Ji and Bawa Jitto Ji.
“Mein Bade Baggan Alla Aan Kay Migi Aj Dowara Mauka Lageya Ki Mein Maa Vaishno Devi Day Charnay Vich Matha Tek Sakeyan. Main Bawa Jito Ji Ghi Bhi Jhukiye Parnam Karna (I’m very lucky that today again, I bowed before Goddess Vaishno Devi Ji. I have also offered obeisance to Bawa Jito Ji),” Modi said at the start of his speech.
Akhnoor, where Modi addressed the rally, is considered to be in the foothills of Mata Vaishno Devi Ji shrine as entire track is visible from many areas of the town. In the past, some people used to trek to the shrine from Akhnoor. Bawa Jito, a legendary and revolutionary farmer is widely revered, who too used to trek to Mata Vaishno Devi Ji shrine daily.
The Prime Minister went on: “Veer Dogron Ki Dharti Ko Aapke Is Chowkidar Ka Parnaam (Salutes to the land of Dogra warriors from this Chowkidar)”.
Then he quoted few lines from famous Dogri song: “Mithi Aay Dogren Di Bholi, Tay Khand Mithe Lok Dogre (Sweet is the language of Dogras and sweet are the Dogras)”.
Modi said he used to hear this song when he was working in Jammu and Kashmir as organizing secretary of the BJP.
He also referred that he was launching party’s election campaign for 2019 elections from Jammu, where he addressed third rally on first day of the electioneering today, the first two being in Uttar Pradesh and Uttarakhand.
Modi described the Dogras as great warriors. It may be mentioned here that during 2014 also, Modi had launched his election campaign by offering prayers at the holy cave shrine of Mata Vaishno Devi Ji on March 26 and then addressed a rally at border town of Hiranagar.