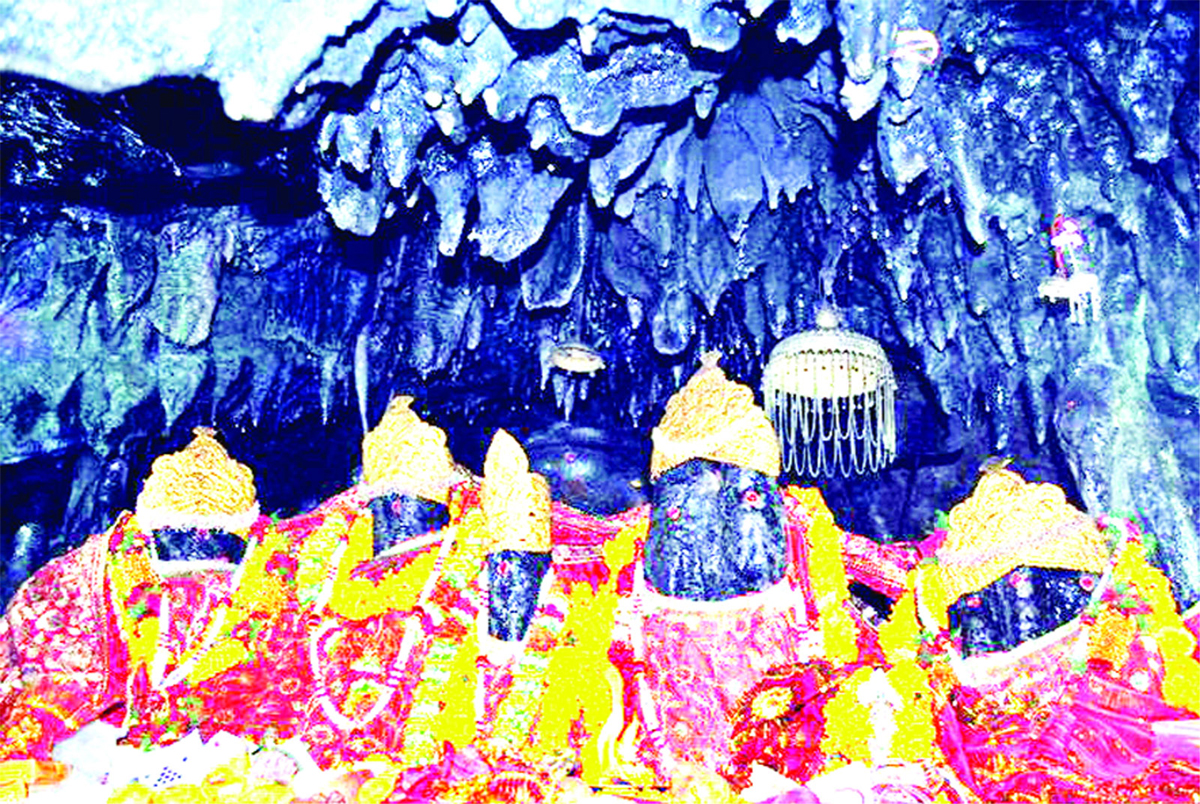 Rajesh Gupta
Popularly known as the crown of our country, the state of Jammu and Kashmir is not only known for its beautiful scenic beauty but is  also endowed with a number of religious places which attract a large number of tourists throughout the year from all over the world .
One such religious place which is gaining popularity since last few years is Holy Pingla Mata Cave. Situated at a hillock in village Pinger on Udhampur-Ramnagar Road, about 20 Km away from Udhampur and 6km from village Kaghote (Kougha) (the base camp),the place consists of a small cave in which the Goddess resides in the shape of a Pindi. The 6 km path from the base camp  which has to be covered by foot  is flanked by beautiful  green pine trees and its peaceful atmosphere makes the devotees forget all their fatigue.
Inside the cave, one can see the Aadi Shakti Mata Pingla besides other goddesses in the shape of Pindies. A stone pot with cooking spoon can  also be seen in the cave shrine which is believed to be used by the Aadi Shakti Mata Pingla to cook food for shepherds.
There are two most famous legends associated with this popular religious place. According to the first legend, some shepherds of the surrounding village used to come to this place along with their cattle. One day they met a girl in the jungle who offered them food. Soon it became a daily routine for them .The girl used to provide them food everyday but at the same time also asked them not to share or disclose this to anyone. The parents of the shepherds were worried why the shepherds did not take food after returning from jungle. So one day a villager decided to follow the shepherds to the jungle and to his surprise, he saw a young girl  serving food to the shepherds. The girl, soon disappeared in the nearby cave. The stone pot and the cooking spoon present in the cave is believed to be the same pot used by the girl (Pingla Mata) to cook food for shepherds.
As per the second legend, some hunters, once came to the jungle for hunting and saw a lion entering into a cave. They quickly collected some firewood and burnt it at the mouth of the cave in order to hunt the lion. In no time, they saw that the lion came out of the cave by piercing the strong stones of the cave. They also saw rays of light emerging out of the cave. Then, they entered the cave and came to know about this holy place.
Many social organizations, viz., Shri Aadi Shakti Seva Sanstha Udhampur, Pingla Mata Pravandhan Committee Ramnagar and Pingla Mata Committee Manwal organize annual pilgrimage from Udhampur, Ramnagar and Manwal on first Sakranti  (during the Month of Savan), Ashwina Navratras(Sept-Oct) and Chaitra Navratras(March-April).The annual pilgrimage of Mata Pingla also sets an example of communal harmony as  people of different communities of this area actively take part in it.
Besides, his the District Administration Udhampur also makes elaborate arrangements for the devotees during the annual pilgrimage and Navratra festival every year. In addition to this,the district administration is putting in its best efforts to develop this religious place for attracting more pilgrim tourists in the area. In this direction, a road from Plassian to Pinger ,having a length of about 13.5 km has also been constructed under PMGSY scheme which would provide road connectivity to the place and would boost pilgrimage in the area. The 13.5 km long road would be completed in two steps. The first step of this project comprises of construction of road from Plassian to Bainsta(length: 8km) and the second step involves construction of  road from Bainsta to Pinger (length -5.5 km). The work on both these roads would be executed in two stages. Out of which, the works corresponding to stage –I of both of these roads have been completed by the PMGSY Department, Ramnagar and people are demaning for its blacktopping for comfortable pilgrimage to the shrine.