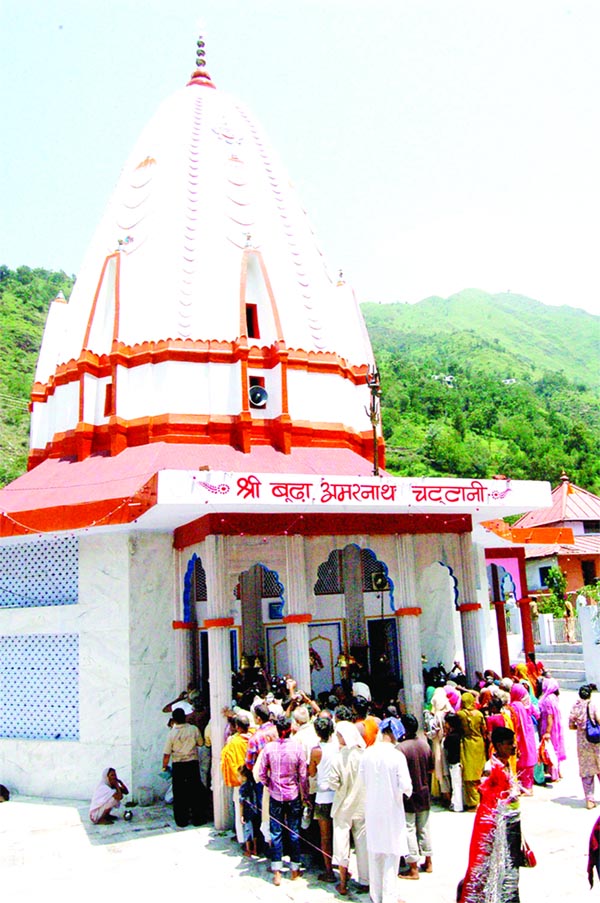 Ronik Sharma
Buddha Amarnath ji “Chattani” is an ancient and unique Shiva temple located in an area well known as ‘Rajpura’ Mandi located nearly 25 kilometers north east of the Poonch town. It is situated in the Pir Panchal range of the mountains. The climate of this place is very cool and pleasant. This place is surrounded by two beautiful snow bound hills, lush green trees and river Pulasta. The temple of the Buddha Amarnath ji has been constructed with one big stone. There are four doors in the temple north, east, west and south sides which indicate that the doors are open for all varnas. A large number of old and new idols have also have been placed inside the temple premises and Lord Shiva manifested himself in the form of ‘Chakmak’ white stone which is natural Shiv Lingham.
In the holy temple of the Baba Buddha Amarnath ji, the devotees have a dip in a spring that flows at a position directly lower than the temple with regard to purification and then have Darshan of immortal Lord Shiva. The devotees from far off places come to pay their obeisance to Lord Shiva. There are numerous legends associated with the Shrine. A story is that Lord Shiva, accompanied by Goddess Parvati on his trip to Amarnath from Kailash made a halt at Budha Amarnath ji Raipura Mandi and the other story is connected with Rishi Pulasta, the grandfather of the Ravana. It is said that he had a darshan of Lord Shiva at Buddha Amarnath ji. It is also believed that Budha Amarnath “chattani” is older than the Amarnath ji of Srinagar and the pilgrimage to Amarnath cave in Srinagar remains incomplete without a visit to this place. It is believed that the Almighty Shiva grants wishes to everyone who makes a pilgrimage to Shri Buddha Amarnath ji in Mandi Poonch. Before partition between India and Pakistan, a large number of people usually used to visit Shri Buddha Amarnath ji through areas now illegally occupied by Pakistan. Now thousands of people from different parts of the country visit Buddha Amarnathji yatra, on Raksha Bandhan and also on the eve of Shivratri.
The route to reach the sacred place of the Buddha Amarnath “Chattani” is from Jammu -via- Sunderbani, Lamberi, Nowshera, Rajouri, Bhimbergali, Surankote, Kalai than Poonch. There is also a route from Kalai-via Chandak to Mandi directly. But usually yatries stay in Poonch during yatra times where the arrangements for the yatries are made in Dashnami Akhara. Pilgrims to Budha Amarnathji Yatra are treated as respectable guests by the organizing committee and the District Administration of Poonch. Irrespective of religion and region all yatris are provided every possible help to facilitate pilgrimage in a good atmosphere. The boarding, lodging facilities are also provided to yatries by the mandir committees of Dashnami Akhara Poonch and Buddha Amarnath Mandi. The arrangements of this yatra are revised every year by the district administration as well as the security officials to prevent any untoward incident the yatra takes off from Jammu to Poonch. When the yatries reach Poonch town they stay at in Poonch city for night and leave for the Budha Amarnath Mandir for performing Darshan of the Baba Budha Amarnath ‘Chattani’ next day. On the occasion of Raksha Bandhan, a big festival, known as Buddha Amarnath Ji Mela is held at the temple. Devotees in large numbers visit the shrine of on Shravan Poornima. The yatra starts on first week of the August every year and culminates on the occasion of the Raksha Bandhan. Two days before the Raksha Bandhan a ‘Chhari yatra’ leaves from Dashnami Akhara Poonch town to the holy sacred place. The holy Mace (Chhari Mubarak) for Shri Baba Buddha Amarnath ji Temple is usually flagged off at Poonch after a huge public Satsang in which thousands of men, women, old and young participate for paying respect to Lord Shiva. In the morning, the pooja of the chhari Mubarak starts with a havan, chanting of mantras and satsang in Dashnami Akhara Poonch.
A guard of honour is also offered to Chhari Mubarak at the front gate of Dashnami Akhara and the holy Mace (Chhari Mubarak) is taken by the swami ji in a procession from Poonch Town toward Shri Buddha Amarnath ji.
Passing from various places nearly 25 kms it reaches mandi temple of the Buddha Amarnath ji in the evening. Enroute to the Budha Amarnath Ji Mandir, the actual procession halts at the ‘Chandak’. The procession is received by local people, army personnel, district administration, leaders of the all political parties, mandir committee etc. A guard of honour by the Security Force is also given at the shrine. It marks the end of the actual Yatra and the Chhari Mubarak is taken inside the Mandir.
The beauty of this pilgrimage is that the members of all the communities manage the stalls that are set up for the convenience of yatries. It is a true example of communal harmony.