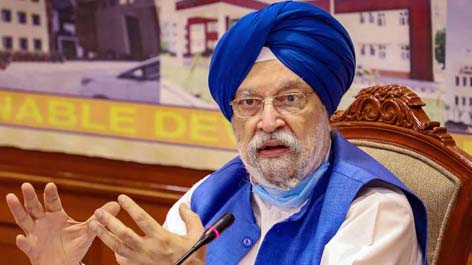 KOLKATA, Sept 23:
Petrol prices in the country are not coming down as the states do not want to bring fuel under the ambit of the GST, Petroleum Minister Hardeep Singh Puri said.
In an interview to PTI here, Puri said petrol prices crossed the Rs 100-mark in West Bengal as the TMC government is levying heavy taxes.
“If your question is do you want the petrol prices to come down then the answer is yes. Now, if your question is why the petrol prices are not coming down, then the answer is because the states don’t want to bring it under GST,” he said.
“The Centre charges Rs 32 per litre (as taxes on petrol). We charged Rs 32 per litre when the fuel price was USD 19 per barrel, and we are still charging the same even when the price rose to USD 75 per barrel. With this Rs 32 per litre, we provide free ration, free housing and Ujjawala, among several other schemes, to the people,” he said.
Puri said the West Bengal government increased prices by Rs 3.51 per litre since July, resulting in the petrol crossing the century-mark.
“The combined taxation is around 40 per cent here (West Bengal). It is very easy to make statements. Had you (TMC government) not increased the price by Rs 3.51, then it would have been still under Rs 100 per litre,” he said.
Puri was in Kolkata on Wednesday to campaign for the Bhabanipur bypoll in which Chief Minister Mamata Banerjee is the TMC candidate against BJP’s Priyanka Tibrewal and CPI(M)’s Srijib Biswas.
“If the result of the Bhabanipur by-election is a foregone conclusion, then why is the entire state cabinet campaigning there? We are confident about a victory, and post-poll violence is a major issue in this poll,” he claimed.
On the political developments in Punjab, Puri said it reflects the “terminal decline” of the Congress.
“Definitely it is an indication of Congress party’s terminal decline. I am choosing my words very carefully. In Bengal, they fought with one set of allies. In Kerala, they fought with a different set of allies. They are drawing almost blank everywhere. In UP, where the Congress party grew up, I don’t know who wants to partner them,” he said.
“What is going with the Congress in Punjab is a comedy and theatre of the absurd,” Puri added.
Pitching for the Citizenship Amendment Act (CAA), the minister said the Afghanistan crisis proved why it was necessary.
“When the legislation was conceptualised, it was very clear that minority community in our neighbourhood would be facing a challenging situation,” he said.
“In CAA, the cut-off date is 2014, and those who had opposed it are now saying that the cut-off date should be made 2021. CAA is to deal with persecuted minorities who fear for their life. As part of our overall philosophy, India as a country has accepted refugees. Those who had opposed CAA then are now looking silly,” he said. (PTI)