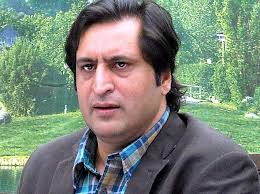 Suhail Bhat
SRINAGAR, Dec 1: Peoples Conference chairman, Sajjad Lone today said that people in Jammu and Kashmir are suffering as a result of lack of elected representatives.
He made these remarks on the sidelines of the workers’ meeting in Srinagar. He said people are participating in political activities as they are experiencing a lot of difficulties in the absence of a popular Government.

Click here to watch video
“Politics infact is a flowing river that no one can stop. I think it is a positive sign that people are becoming involved in politics because they miss having a popular Government here while they are dealing with so many problems. It is a good sign, “he said.
Lone said they are not implying that the bureaucracy is incapable of running affairs in Jammu and Kashmir, but rather, “it is the democratic tradition for people to choose their representatives”. “They can easily go to the elected representatives and hold them accountable,” he added.
Lone said that the demand for the reinstatement of Article 370 will never die and that the Centre will reinstate the special status as it is the people’s right. “They must provide us with statehood and Article 370. I am sure that they will restore it on their own, as it is our right. We will get Article 370 either in Parliament or in Supreme Court, and we were the first to approach the court on the issue”, he said. He added that they must first persuade the Centre to revoke the Article 370. “The current party will not restore it, but they will not always be in power”, he said.
In response to NC vice president Omar Adbullah’s remark that the situation would have been different if they had been in power during the repeal of Article 370, he said it was his new lie. “He is the Valley’s biggest liar. He would have done nothing, as we had seen what he did in 2010 when children were getting killed and the Union Home Minister was considering whether or not to give relaxation in curfews. He had the option to resign, but he decided to stay in power”, he said.
When asked about claims made by some leaders that the BJP is using certain parties to split votes in the Jammu and Kashmir, he said: “We are a 45-year-old party that has seen nothing but beatings and incarceration. Hundreds of employees have been arrested under the PSA; many have been killed, and others have been imprisoned. We are not an established party, although the NC and the PDP are both established parties. PDP was founded in 2002, and NC began as a cadre-based party before becoming the establishment party in 1996. We have taken the brunt of NC’s thrashing. The establishment’s favorites are blaming us, which is an ironic move”, he said.
He said the NC is talking about vote division, but they are doing just that in the erstwhile Doda District. “They’re talking about vote-split, but who has sent them there to do that? Because of vote splitting, the BJP, which was unable to get a foothold there, now has four seats. Who is it that has dispatched them to this region? If they stay away, the Congress has a good chance of winning”, he said.
When asked about the restoration of Article 370 like Farm laws, Lone said Muslims in Kashmir should stop equating themselves with farmers and wake up from their delusions. “This is the new drama. No one is bothered about Kashmiri Muslims. The demand for the restoration of Article 370 will never fade, and I am confident that they will bring it back without any outside pressure”, he said.