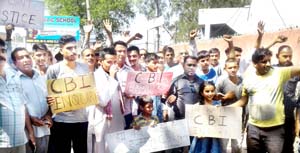 JAMMU, Apr 29: The villagers drawn from Budhi, Barnoti, Nanan, Pandhrad, Thanoon closed the shutters of their shops and other business establishments and took out a protest march at village Budhi in support of their demand of CBI inquiry into Rassana murder case.
The protesters led by prominent citizens included the Roshan Sharma, Rameshwar Kumar, Rampal, Subash Chander, Rakesh Dogra, Om Parkesh, Joginder Pal, Ramesh Kumar, Parveen Kumar and Ram Chand including large numbers of youth and girl students took out protest march in the Budhi village .
The participants carrying the placards with slogans of CBI inquiry in Rassana girl murder case and were raising the slogans in favour of their demand also. The protesters Roshan Sharma asked the Chief Minister to respect the sentiments of the people of Jammu as the people of Jammu who may come on the roads demanding the CBI inquiry so that justice may be dispensated to innocent girl and also to put the real culprits behind the bars.
He alleged that the real culprits are roaming free and they are trying to divide the communities on communal lines. Such people be traced out and should be punished. He said when the people of Jammu are demanding CBI inquiry which is one of best agency in the country then why the Chief Minister is not agreeing the same.
He said it is better to announce CBI inquiry by State Government before it announced by court. He said a big conspiracy has been hatched to derail the peace process in Jammu and create disturbance on the pattern of Kashmir.