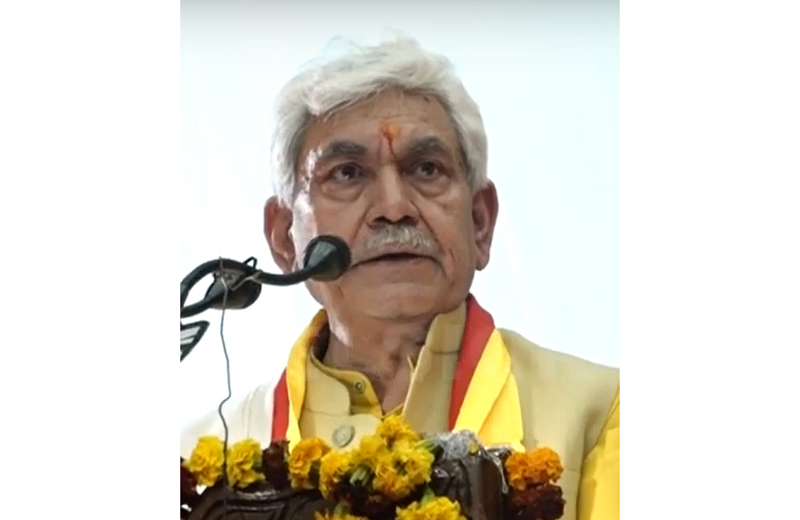 Sanjeev Pargal
JAMMU, Dec 8: Lieutenant Governor Manoj Sinha said today that remaining terrorism will be finished and Jammu and Kashmir will be rebuild to restore its historic place in the country even as he maintained that situation has now changed in the Valley and people are hitting streets against the violence.

Click here to watch video
Addressing a function ‘Message of Humanity’, organised by Dogra Sadar Sabha J&K, Jammu, Sinha declared that opposition to individuals is understandable but none will be allowed to oppose India.
“We have two major issues before us. First is to destroy remaining terrorism in Jammu and Kashmir and second is to rebuild J&K to restore its historic place in the country,” he said, adding those who are trying to disturb peace should be opposed.
Asserting that situation has now changed in Kashmir, Sinha said the people are hitting streets against violence and thousands marched in the Valley carrying tricolor and raising slogans of ‘Bharat Mata Ki Jai’.
He said a situation was developed in nineties when separatism and militancy were born and laws that discriminated between people were not only made but were allowed to continue. Ecosystem of terrorism was not only created but was sustained causing sufferings to the common man
However, he added, now the situation has changed. With the efforts of Prime Minister (Narendra Modi), an equitable society has been created in Jammu and Kashmir.
“Now the youth have laptops in their hands and not stones. Days are gone when calls for hartals in Kashmir were given from across the border,” Sinha said.
Maintaining that some forces are still trying that old system should be restored, the Lieutenant Governor said there is need to understand that peace has to be established and not bought. There was a time when peace was bought but now there are Governments in India and Jammu and Kashmir which believed in establishing peace, he asserted.
“How long there will be politics on the blood of innocent people”? Sinha asked and said his Government has clear ‘mantra’ begunaahon ko cheedo mat aur gunahgaaron ko chhodo mat (don’t touch the innocents and don’t spare the culprits). He said if any innocent is victimised, the Government takes action.
Describing smuggling of narcotics in the Union Territory as “conspiracy” and “form of militancy”, Sinha said some forces are trying to destroy the generations. This attempt has to be foiled, he added.
Noting that development can’t take place in any part of the world without peace, he said if Jammu and Kashmir has to develop further; peace and law of land has to be maintained.
“Sometimes questions are asked whether our challenges have ended. No doubt, we have achieved successes against militancy and separatism to quite an extent but challenges still remain,” the Lieutenant Governor said.
An official handout said:-
Addressing the august gathering, the Lt Governor said that the convention provided a unique platform to spread the eternal & universal message of peace, social equality and communal harmony; aptly echoing the belief of all humanistic thinkers around the world.
“We are the inheritors of a great civilisation that has always believed in world peace and universal brotherhood. Thinkers and individuals must take advantage of the immense moral force of the two and contribute to create an inclusive ecosystem for the society,” he said.
Noting that social development and aspirations of people can be fulfilled only in conditions of peace, Sinha said every segment of society must realize the futility of conflict and utility of peace, harmony and brotherhood.
“As India has assumed G20 Presidency for the next one year, the message of peace, friendship and cooperation enshrined in our cultural heritage should become the guiding principle for the world,” he said.
Earlier, prominent religious scholars from different religions, including Padma Shri Vishwamurti Shastri, Moulana Shahzad Azam Anwari Qasmi, President SGPC, S Ranjit Singh and Fr.Lawrence Tharsis, spoke about the message of fraternity and love as taught by all religions which need to be instilled in the hearts of younger generations.