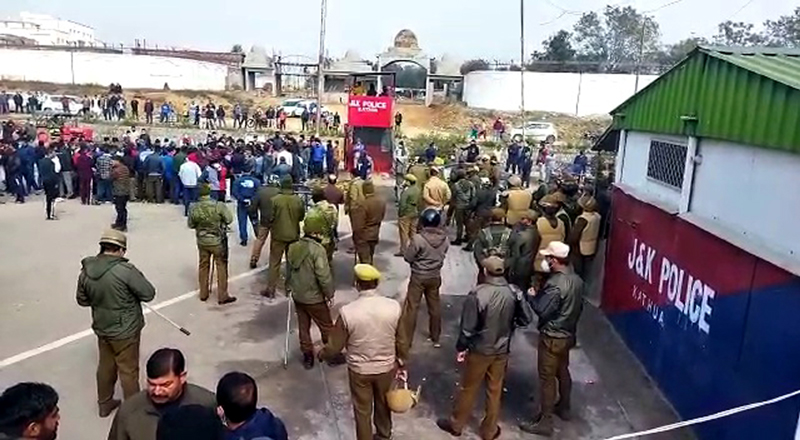 Excelsior Correspondent
KATHUA, Feb 6: The allegedly custodial death of a youth sparked protest by the residents of Tapyal who blocked Jammu- Pathankot National Highway for more than five hours at Londi Morh in Kathua district.
The protestors accused the police of the custodial death of the youth who died under mysterious circumstances in police lockup at Police Station, Hiranagar this morning.
The protests sparked when the family members and villagers of Tapyal came to know about the mysterious custodial death of Sunil Kumar , 32, son of Narayan Dutt resident of village Tapyal, Ghagwal and the Police declared it suicide inside the lockup.
The numbers of the people assembled at Londi Morh and blocked the National Highway. The family members including the women sat in the middle of road and blocked the traffic movement for more than five hours. Click here to watch video
The family members alleged that the youth was tortured brutally and killed by police in the lock up. Dharanveer and Jai Lal Verma said that three persons including Sunil Kumar were arrested by police on February 3 and five grams of Chitta was recovered from their possession when they were travelling in a car . But the car belonged to Sunil Kumar was hired by two youth. The two youth were let free by police later. Sunil Kumar was booked in NDPS case. They said that he was fine when last evening they met him but later was brutally beaten up by the police resulting in his death. They declared it an open murder and custodial death.
They were demanding the registration of murder case under Section 302 against the SHO Hiranagar Yash Pal and his associate police personnel. They also demanded Magisterial enquiry into the matter to gave justice to deceased family, job for his family as he was just married one and half years ago. The family also alleged that Hiranagar police declared it suicide to save its skin. If he has committed suicide, why the police did not inform the family members and why police shifted the body to GMC Kathua without family .They raised number of questions against working of police.
As per police reports on 03.02.2022 a police team led by Inspector, Yash Paul Sharma SHO, PS Hiranagar laid a Naka/checking duty at Londi Morh and noticed one suspicious vehicle (Alto) bearing Registration Number JK02AE-0262 which was being driven by one person namely Sunil Kumar, son of Narayan Dut of Tapyal Ghagwal district Samba who was coming from Dyalachak side towards Samba. It was directed to stop for checking. On physical search, approximately 11.47 grams of heroin (Chitta) like narcotics was recovered from his illegal possession.
Meanwhile, one person was arrested and all the recovered narcotics substance along with vehicle was seized on spot. A case FIR No. 12/2022 U/S 8/21/22/29/ NDPS Act stands registered at PS Hiranagar.
The arrested youth was under police custody where he died under mysterious circumstances.
After five hours long protest , DC Kathua, Rahul Yadav, SSP, RC Kotwal reached to protest site and tried to pacify the victim family. The Deputy Commissioner assured the victim family that a Magisterial enquiry of custodial death will be ordered and Rs one lakh compensation will be paid to the family and higher authorities will be approached for job for dependant. The Magisterial enquiry will be initiated by ADC Kathua.
The police source said that three police personnel on night duty at Hiranagar Police Station were placed under suspension and SHO Hiranagar Yash Pal has been attached to Police Line, Kathua.
Numbers of passengers suffered due to blockage on National Highway . The passengers including the women and children were seen facing problem and were helpless to move on the road . The traffic was restored after the protestors lifted the dharna.
Meanwhile, family refused to take the body for cremation alleging that police did not show them the dead body to ascertain whether it has not injury marks on any part of the body. They said they will take up issue with ADC tomorrow probing the death.